Democrat John Bel Edwards scored an easy victory over Senator David Vitter last night in Louisiana, and Vitter announced that he'd be leaving the Senate after his term is up. 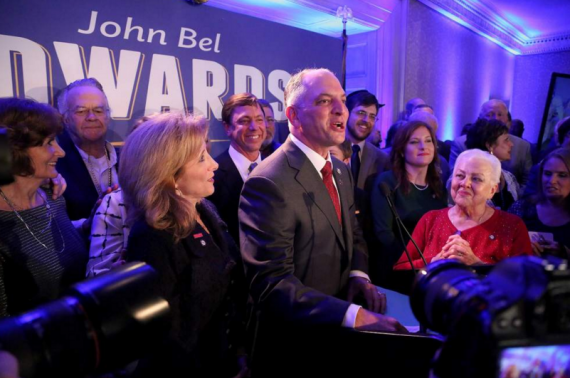 Confirming polling that had been conducted in the month since the state’s jungle primary, Democrat John Bel Edwards soundly defeated Senator David Vitter yesterday in the race to be Louisiana’s next Governor, and Vitter created more political news when he conceded the race by announcing that he would not be running for re-election to the Senate:

NEW ORLEANS — With a victory that defied political geography and near universal predictions from just months earlier, a previously little-known Democrat, State Representative John Bel Edwards, soundly defeated United States Senator David Vitter in a runoff election on Saturday to become the next governor of Louisiana.

Mr. Edwards won 56 percent of the vote with virtually all of the ballots counted.

A more promising red state Democrat could hardly have been found than Mr. Edwards, a Catholic social conservative from a family of rural law enforcement officers who graduated from West Point and served eight years of active duty in the Army.

Mr. Vitter, for his part, was a problematic candidate for Republicans, even though he had been widely seen as the favorite for months. A prostitution scandal from 2007, the baggage of an unpopular Republican incumbent, Gov. Bobby Jindal, and a series of state political foes with long memories dragged Mr. Vitter down before an Oct. 24 primary. He never recovered.

Not only did he lose this race but Mr. Vitter told supporters Saturday night that he would not run for re-election to the Senate in 2016. Republican strategists in Washington had expressed reluctance to put money behind him, preferring a candidate who would be an easier sell in a tricky election year for Senate Republicans. A line of Republicans interested in the seat has already formed.

In a state that has not elected a Democrat to statewide office since 2008, and in a part of the country where Democratic campaigns for governor are mostly suicide missions, a Republican was assumed to have an easy path to victory. Mr. Vitter was thought to be that Republican, given his overwhelming fund-raising advantage, unquestioned conservative reputation and proven skill at crushing challengers.

But last month’s nonpartisan primary, among Mr. Edwards, Mr. Vitter and two other Republicans, began to sizzle in its closing weeks. Mr. Vitter attacked the other Republicans as free-spending liberals while they labeled Mr. Vitter “vicious” and “a liar,” bringing up the prostitution scandal in debates. Something of an “Anybody but Vitter” movement began to form, powered in part by two “super PACs” formed expressly to seek his defeat.

Still, it was in the last days before the primary that the carnival tradition of Louisiana politics began to truly assert itself.

An investigative blogger published an interview with a former escort who claimed to have carried on a yearslong affair with Mr. Vitter. Soon after, a private investigator working for the Vitter campaign was arrested after surreptitiously filming a group of men at a cafe outside New Orleans — a gathering that included another private investigator, one who had tracked down the escort in the online video.

Mr. Vitter, 54, limped into Saturday’s runoff after finishing far behind Mr. Edwards, 49, in the primary, and became the standard-bearer for a Republican Party splintered by infighting.

In the weeks between the two elections, Mr. Vitter tried various tactics against Mr. Edwards: warnings that he was an “Obama liberal” in Blue Dog clothing; provocative attack ads accusing him of wanting to release “thugs” from prison or of being dangerously uncommitted to keeping out Syrian refugees; and personal ads in which Mr. Vitter obliquely addressed the prostitution scandal by saying he had been forgiven by his family.

As I noted in my post yesterday, the pre-election polling seemed to strongly indicate that Edwards was headed for a sizable victory last night notwithstanding the fact that Republican has, if anything, become a far more Republican state since the last time it elected a Democratic Governor in 2003 or the last time it elected any Democrat in a statewide race when Mary Landrieu won re-election, a seat she of course lost just last year. One of the factors helping Edwards was the relative unpopularity of incumbent Governor Bobby Jindal, who was barred from running for re-election. Polling this fall from both Morning Consult and the University of New Orleans showed Jindal to be wildly unpopular even among Louisiana Republicans, and it’s likely that this carried over to the race to succeed him. To a large degree, though, it seems clear that the outcome of the election was largely based on an anti-Vitter feeling among voters, no doubt helped by the attacks Vitter enduring during the jungle primary and the ad campaign that Edwards ran in the run up to last night that referenced the prostitution scandal that Vitter had become involved in. The best indication of that can be seen in the fact that, while Edwards defeated Vitter by 56% to 44%, Vitter’s fellow Republican Billy Nungesser, the former head of Plaquemines Parish who had received national exposure during the BP Oil Spill crisis, won his race for Lieutenant Governor 55% to 44%. (Source) Clearly, Vitter’s loss was not a rejection of Louisiana Republicans per se but a specific rebuke of him.

While Vitter’s loss wasn’t necessarily a surprise, his announcement that he would not seek re-election did some as something of a surprise, at least in its timing. Obviously, had Vitter won last night he would have had to step aside from the Senate before taking office and would have likely exercised his authority as Governor to appoint a successor who would then stand for election in the November 2016 election. What would happen if he didn’t win, though, was largely a matter of speculation until Vitter came out and said it. Indeed, initially several of the reporters in the room reported on Twitter stated that Vitter had announced that the Senate was immediately leaving the Senate, due apparently to the fact that he wasn’t clear at first. It quickly became clear, though, that what Vitter meant that he would not run for re-election but would still serve out the remainder of his term, meaning that Louisiana will have an open seat election next year.

Julia O’Donoghue at The New Orleans Times Picayune discusses what that means for Louisiana politics:

Now that Vitter is out of next year’s Senate race, a number of people will likely be interested in the job. Some Republicans were already preparing to run for his seat, when they thought he had a good chance of winning the governor’s race.

U.S. Rep. Charles Boustany, who represents the Lafayette and Lake Charles area, wants the position and has been traveling Louisiana over the past couple of months. U.S. Rep. John Fleming, who represents north Louisiana, has also expressed interest in Vitter’s seat.

Kennedy was also angling for the appointment to Vitter’s Senate seat, if Vitter had been elected governor. Boustany, Fleming and Kennedy all attended Vitter’s gubernatorial party Saturday night, in spite of knowing he likely wouldn’t win.

In an interview after Vitter’s announcement, Kennedy declined to say whether he would run for the office now that Vitter is stepping down.

“I think people have had enough of politics for awhile,” Kennedy said. “I’m going to go duck hunting with my son.”

Not everyone who might jump into the Senate race next year would be a Vitter ally. Public Service Commissioner Scott Angelle was considering a run for Senate, even if Vitter had decided to run for re-election. Angelle was one of Vitter’s Republican opponents in the gubernatorial primary. He angered Vitter when he refused to endorse the Senate against Edwards in the runoff election.

New Orleans Mayor Mitch Landrieu also declined to rule out a run for Senate when asked by a reporter recently. Given Edwards stellar performance this evening, Landrieu may consider the Senate more seriously, now that a Democratic statewide victory appears more plausible.

Other names that have been mentioned in the wake of Vitter’s decision to retire include Republican Congressmen Steve Scalise, the current House Majority Whip who had briefly stood for election as House Majority Leader when it appeared that Kevin McCarthy would be succeeding John Boehner as Speaker of the House. Two potential candidates who have already ruled themselves out are Governor Bobby Jindal, who said shortly after withdrawing from the race for President that he had no interest in running for Senate if Vitter won yesterday, and former Senator Mary Landrieu, who ruled out an attempt at a comeback earlier this year. In the end, though, this being Louisiana it seems clear that whoever emerges from the state’s jungle primary as the Republican nominee next year will be the odds-on favorite to win the election, and may well win the election outright in that primary. In the end, Louisiana is a red state and last night’s results would likely have been different had Republicans united behind a candidate other than Vitter.