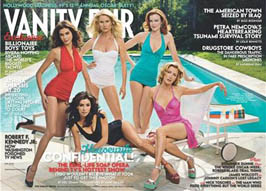 They may appear sultry and ready for summer on the May cover of Vanity Fair, but according to the magazine, the stars of ABC’s “Desperate Housewives” were actually steaming angry. Vanity Fair’s cover proclaims: “You wouldn’t believe what it took just to get this photo!” The article acknowledges that the poolside photo-shoot, in which the five women appear in different colored bathing suits, was manned by an ABC representative who was to make sure that certain demands were met – including that Teri Hatcher didn’t select her wardrobe first or appear in the center of any group photo.

“Whatever you do,” the ABC rep, who wasn’t identified by name, said when he arrived on the set, “do not let Teri go to wardrobe first.” Despite the rep’s plea, Hatcher was the first “housewife” to visit wardrobe, and she had consulted with the stylist days in advance. At one point, the rep proclaimed: “This is a problem. I’m getting text messages from Eva (Longoria). Everything is not fine.”

The struggles continued once the photographer started snapping. Redhead Marcia Cross turned red-hot when she saw Hatcher standing next to her in the center of the shot, according to the article. Cross grabbed her bathrobe and stormed egoff, spewing expletives at the ABC rep. Hatcher later walked to the other end of the set, where “she got into a tearful, heated conversation on her cell phone.”

In the fold-out May cover, which hits newsstands April 12, the center position belongs to Nicollette Sheridan, who’s flanked by Hatcher and Cross with Longoria and Felicity Huffman posed beneath them on a chaise – although Cross and Huffman can’t been seen when the cover is folded.