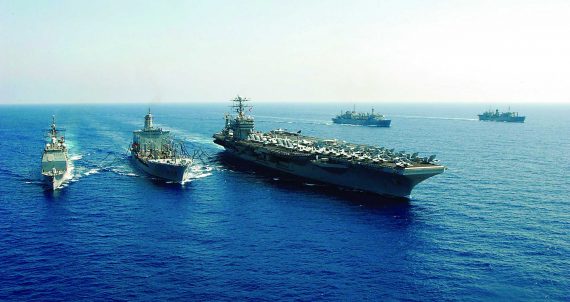 Just over a week ago it was reported that the United States was moving a carrier battle group headed by the USS Carl Vinson closer to the Korean Peninsula in response to increased provocation from the DPRK and the rumors that it would attempt some kind of demonstration as part of last weekend’s 105th anniversary of the birth of Kim Il Sung, the nation’s founder. As it turns out, the ships weren’t anywhere near Korea:

WASHINGTON — Just over a week ago, the White House declared that ordering an American aircraft carrier into the Sea of Japan would send a powerful deterrent signal to North Korea and give President Trump more options in responding to the North’s provocative behavior. “We’re sending an armada,” Mr. Trump said to Fox News last Tuesday afternoon.

The problem was that the carrier, the Carl Vinson, and the three other warships in its strike force were that very moment sailing in the opposite direction, to take part in joint exercises with the Australian Navy in the Indian Ocean, 3,500 miles southwest of the Korean Peninsula.

White House officials said Tuesday that they had been relying on guidance from the Defense Department. Officials there described a glitch-ridden sequence of events, from an ill-timed announcement of the deployment by the military’s Pacific Command to a partially erroneous explanation by the defense secretary, Jim Mattis — all of which perpetuated the false narrative that a flotilla was racing toward the waters off North Korea.

By the time the White House was asked about the Carl Vinson, its imminent arrival had been emblazoned on front pages across East Asia, fanning fears that Mr. Trump was considering a pre-emptive military strike. It was portrayed as further evidence of the president’s muscular style days after he ordered a missile strike on Syria that came while he and President Xi Jinping of China chatted over dessert during a meeting in Florida.

With Mr. Trump himself playing up the show of force, Pentagon officials said, rolling back the story became difficult.

The story of the wayward carrier might never have come to light had the Navy not posted a photo online Monday of the Carl Vinson sailing south through the Sunda Strait, which separates the Indonesian islands of Java and Sumatra. It was taken on Saturday, four days after the White House press secretary, Sean Spicer, described its mission in the Sea of Japan.

Now, the Carl Vinson is finally on a course for the Korean Peninsula, expected to arrive in the region next week, according to Defense Department officials. White House officials declined to comment on the confusion, referring questions to the Pentagon. “Sean discussed it once when asked, and it was all about process,” a spokesman, Michael Short, said of Mr. Spicer.

Privately, however, other officials expressed bewilderment that the Pentagon did not correct its timeline, particularly given the tensions in the region and the fact that Mr. Spicer, as well as the national security adviser, Lt. Gen. H. R. McMaster, were publicly answering questions about it.

“The ship is now moving north to the Western Pacific,” the Pentagon’s chief spokeswoman, Dana White, said Tuesday. “This should have been communicated more clearly at the time.”

Now it’s being reported that the Vinson and its support ships will spend an extra 30 days on deployment near the Korean Peninsula once they reach their destination:

The USS Carl Vinson will spend an extra 30 days on deployment in order to patrol the waters off the Korean Peninsula, the ship’s commander announced late Tuesday night.

Rear Adm. Jim Kilby, commander of Carrier Strike Group One, said in a Facebook post that the Carl Vinson will spend an extra 30 days at sea in order to “provide a persistent presence” near North Korea.

“Our mission is to reassure allies and our partners of our steadfast commitment to the Indo-Asia-Pacific region,” Kilby wrote. “We will continue to be the centerpiece of visible maritime deterrence, providing our national command authority with flexible deterrent options, all domain access, and a visible forward presence.”

The Carl Vinson is the subject of controversy this week after the White House said last week it had sailed toward North Korea in order to provide a deterrent for Kim Jong-un’s scheduled missile test. A photo posted on Sunday showed the ship near Sumatra in the south Pacific, and reports surfaced Tuesday that it had sailed south instead of north when the White House made that statement.

It’s entirely possible, of course, that the Pentagon was being intentionally vague about the location of the Vinson and it’s intended course in order to throw the North Koreans off. If that’s true, though, it’s unclear why the White House was apparently left out of the loop, or were they?

Problems With The Response To Ebola, And A Little Perspective