While the majority of key Republican leaders are going along with President Trump’s pretense that the outcome of the 2020 election is still in doubt, the number who have had enough is growing. Ohio’s Governor joined their ranks this morning.

Contrast that with DeWine’s statement Monday: “I congratulate Vice-President Biden,” he said. “When lawsuits have concluded and election results are certified, it is important for all Americans to honor the outcome.”

Calling Biden the president-elect might seem like a hair-splitting distinction, but it’s one few Republicans have made.

Forbes’ Andrew Solender is keeping a list of those who have acknowledges Biden’s win, along with a record or the exact words they used.

I’ve included only major elected officials, so this doesn’t include prominent cabinet officials and the like.

While there are some very big names on the last—including a two-term President and the party’s most recent pre-Trump Presidential nominee—it’s admittedly short. But the fact that it keeps growing is another sign that Trump’s gambit is going nowhere.

It needs to include the Senate Majority Leader and House Minority Leader very soon to end the charade and get the formal transition process going. 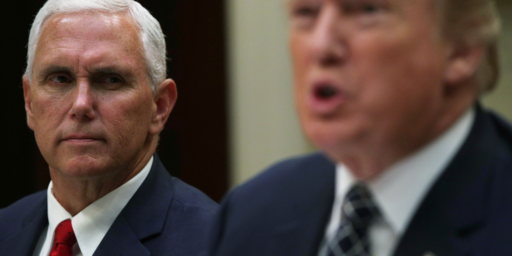