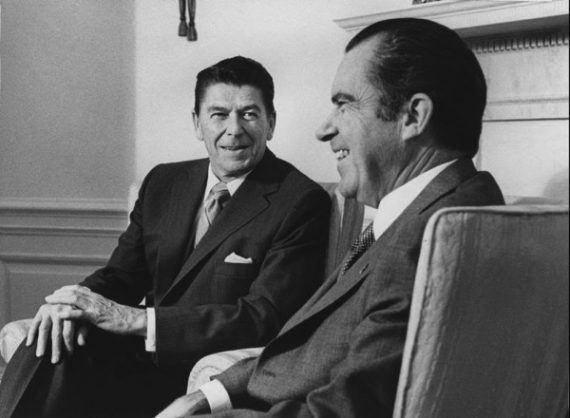 The final batch of Nixon White House Tapes was released this week, and included among them was a phone call between Nixon and a man who would hold his office a mere eight years later:

On the night of April 30, 1973, President Richard Nixondelivered an address to the nation in which he revealed the details of the ongoing scandal surrounding the break-in at the Watergate Hotel. That night, he took a phone call from California Gov. Ronald Reagan. The details of that call were not known until Wednesday when the last remaining Oval Office tapes taken during Nixon’s administration were released to the public. In that phone call, Nixon sounds conspicuously up-beat and weaves from topic to topic. This has led some to speculate as to whether the president was enjoying a celebratory alcoholic beverage after the conclusion of the speech.

“I couldn’t be better,” Nixon insisted after warmly greeting Reagan on what should have been a somber night.

“The time is so far different,” Nixon, a California native, continued. “The time is only 7 o’clock or 8 o’clock there, huh?

“How nice of you to call,” the president added.

“You can count on us,” Reagan said after noting how difficult it must have been to deliver the Watergate speech. “We’re still behind you out here.”

“Each of us is a different religion,” Nixon said, pivoting. “But, God damn it Ron, we have got to build peace in the world. And that’s what I’m working on.”

There have long been rumors about Nixon suffering from depression as the Watergate scandal closed in around him, as well as about alleged excessive alcohol use. So, in some sense, it isn’t a shock that someone would ask this type of question.

But, here’s the record, you be the judge. All I can say is that, if President Nixon wasn’t hammered then he was rambling incoherently for some other bizarre reason:

Okay, technically it’s true that Reagan called Nixon after the speech. I took some artistic license with the post title.