Now, in my capacity as vice president, I am the president of Senate, the presiding officer. I’m up in the Senate most Tuesdays when they’re in session. The first time I ever met you was when you walked on the stage tonight. 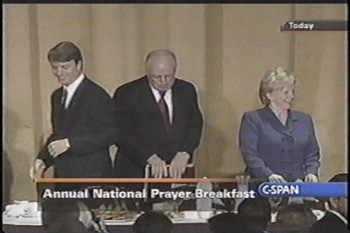 Now, really, does anyone expect us to believe that Cheney noticed Edwards? I mean, there was breakfast involved.

In perhaps the most awkward blooper of the evening, Cheney told Edwards to his face that they had never met before the debate. Edwards’ campaign later provided a transcript of a February 2001 prayer breakfast at which Cheney began his remarks by acknowledging the North Carolina senator. The campaign said the two also met when Edwards accompanied the other North Carolina senator, Elizabeth Dole, to her swearing-in ceremony. Cheney and Edwards also shook hands when they met off-camera during an April 2001 taping of NBC’s “Meet the Press,” moderator Tim Russert said Wednesday on “Today.” Cheney was trying to make the point that Edwards was an absentee senator. “The first time I ever met you was when you walked on the stage tonight.”

One presumes Cheney’s NPB speech was written for him and it’s conceivable that he didn’t remember the other brief encounters. Really, though, that misses the point. The context of the remark was that Edwards is seldom seen on the Senate floor, an undeniable truth. None of these “meetings” changes that.