An excellent essay by Adam Sternbergh "On the Enduring Appeal of 'Die Hard.'" 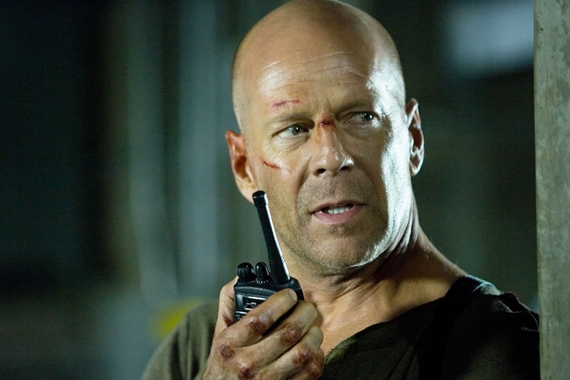 An excellent essay by Adam Sternbergh “On the Enduring Appeal of ‘Die Hard.’”

Sure, he has his catchphrase (“Yippee-ki-yay” et cetera), his quips, his bloodied brow and his sleeveless tees. (In the third movie, “Die Hard: With a Vengeance,” McClane shows up in his first scene wearing only his trademark undershirt and no explanations are offered or needed, any more than anyone at this point asks Superman to explain his cape.) But what does McClane stand for? What is he an icon of? Unlike Rocky or Batman (or Hamlet), McClane is tricky to pin down. Or perhaps it’s my affection for McClane that’s tricky. Who is this man I’ve spent 25 years with — whom I met as a teenager and still hang out with in my 40s? Yes, he has his Everyman appeal. But who among us really aspires to be an Everyman? For Pete’s sake, I’m already an Everyman.

Except for the first one, I don’t even especially like the “Die Hard” movies. The second one’s not so good. The third one is pretty good. The fourth one is slightly better, especially if you happen to catch it on a plane or FX. The fifth one — well, the fifth one just came out and let’s just say it’s less a coherent movie than it is a snuff film for cars and helicopters.

It’s difficult to evaluate the “Die Hard” series as a whole, however, because, by all logic, none of these sequels should exist. With “Rocky,” each installment makes narrative sense: he’s a fighter, so it follows that there should be more fights. But the very premise of the original “Die Hard” precludes continuation. That’s part of the genius of the film. It completely flips the standard action-movie narrative, in which some world-class expert (the gunslinger; the safecracker; the ex-Green Beret) is lured out of hiding to tackle one last mission, to slay one last unslayable foe. The premise of “Die Hard” is that a regular New York cop is stuck unexpectedly in a building full of bad guys. The idea that this same guy finds himself in the same situation again — that stretches credulity.

It has long been said that much of McClane’s allure lies in the fact that he’s just an average dude — he’s just like us — though in reality that doesn’t quite explain it, either. Most of his appeal lies in the fact that he’s just like Bruce Willis. Whatever your opinion of Willis as an actor (and mine’s pretty high, actually), you have to root for a guy who struggled to make the leap to movies from TV, went bald and doesn’t hide it and has the weirdest-looking movie-star nose this side of Owen Wilson. There’s a DVD extra that comes with some of the recent “Die Hard” films, in which John McTiernan, the director of the first and third films, says: “The John McClane character was built out of Bruce. We said, ‘O.K., who is this guy?’ A lower-middle-class kid from New Jersey with a lot of spunk. We better try and build John McClane out of that.” And it’s true: whatever pleasures remain in the maxed-out “Die Hard” franchise are all a result of Willis’s residual charm. To borrow a presidential metric, McClane’s not the smartest, toughest or savviest action hero, but he is the one you would most like to have a beer with.

The Bond films, like most action-adventure movies, are, in essence, about order triumphing over chaos. Bond represents order. Bond bests Blofeld (or whomever). Chaos is beaten back. Order is restored.

The “Die Hard” films offer a different promise: not that everything will go right, but that there’s always hope that something will go wrong. Most often, that something is John McClane. “Just a fly in the ointment,” as he describes himself. “The monkey in the wrench.” His adversaries are consistently personifications of bloodless efficiency. They’re not watch-the-world-burners like the Joker, but a lock-step group of automatons — accented terrorists, rogue American special-ops soldiers or computer hackers — who roll in wordlessly to enact some implausibly elaborate scheme: snipping wires, setting explosives, plugging in passwords, popping open vaults and shooting people using silencers. McClane, ultimately, is the meddlesome kid who messes up their careful plans. He owes less to Marshal Dillon than he does to Scooby-Doo.

Even as the movies keep getting worse, the idea of McClane becomes all the more appealing. In fact, he makes more sense to me at 42 than he did at 17. All those heroes who once stood for certainty, fearlessness and unwavering confidence have been swept away, their statues toppled — and the one still standing is the one who represents fear, anxiety, frustration, uncertainty and, despite it all, irrational hope. This is a jittery world, and increasingly so, and complex beyond understanding, and at times it all seems stitched together by the barest of threads, and this feeling only gets worse as you get older. Expertise, it turns out, offers little solace. So it makes sense that the best, most enduring modern hero is not one who vows to wrap his muscular arms around the world and hold it all together. It’s the one who promises that, when it all falls apart, you can still hope to hobble away from it, limping on your glass-shredded feet, bloodied but somehow still intact.

The essence of the “Die Hard” films, ultimately, is that they’re built around an idealized version of Bruce Willis. That’s the same formula employed by the best of the John Wayne movies: Regardless of whether he was in the Old West, the American Civil War, 1920s Ireland, or World War II, he was always the same guy. Willis is Willis throughout the “Die Hard” flicks but also his other action movie turns. (“The Last Boy Scout” is a particular favorite of mine.) It’s not that Willis isn’t and Wayne wasn’t a versatile actor. Both made some good movies that defied the formula. But they’re not the ones we watch over and again.