Disaggregating the Conversation about Wisconsin

There are a lot of issues on the table, so to speak, in the WI situation. Here I try to entangle them a bit. 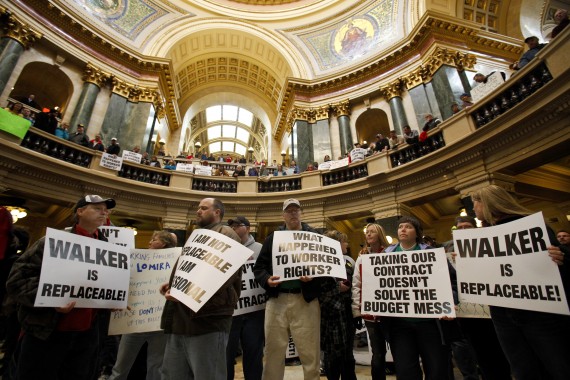 As is often the case in politics, the issues at hand in Wisconsin are multiple which leads to discussions wherein one of the following (at least) happens:  conflation of multiple issues into one, the privileging of one issue over others in a way that ignores key elements of the conversation, or the veering off the conversation into other issues not really on the table.

To wit we have, conflation:  the issue of whether teachers should have to pay more for their benefits should not be conflated with the issue of taking away their collective bargaining rights (while both are in the legislation, they are separate issues needing separate discussions*); privileging one issue over the other:  making ending collective bargaining for Wisconsin teachers an ideological crusade when the real issue is supposedly a fiscal emergency; and veering:  arguing about teacher compensation, i.e., are they paid too much or too little (which really isn’t the issue right here, right now).**

The situation in Wisconsin has multiple elements that can be broken down as follows:

The longer this goes on, the more it seems that all of this is either getting mixed together in one big confusing mélange and/or one issue gets a lot of focus in a way that is out of proportion to the actual events at hand.  And, I would add, I am likely missing something in my lists.

I would argue that while one has to deal rather heavily with list #2 in one’s discussion of list #1, it seems that a lot of the discussion has veered off from the legislative matters at hand which is what is going to eventually be voted on.

This is more an organizational post than anything else, but there are a couple of issues I want to address individually which I will do in additional posts.

Are there any glaring omissions in these lists?

*Indeed, I would prefer them to be separate votes, for that matter, but that is a different issue.

**Yes, the overall theme is compensation, but not the philosophical question of whether teachers ought, or ought not, make a specific amount of money per year.