The President's Cabinet is less a Team Of Rivals and more a Team Of Managers. 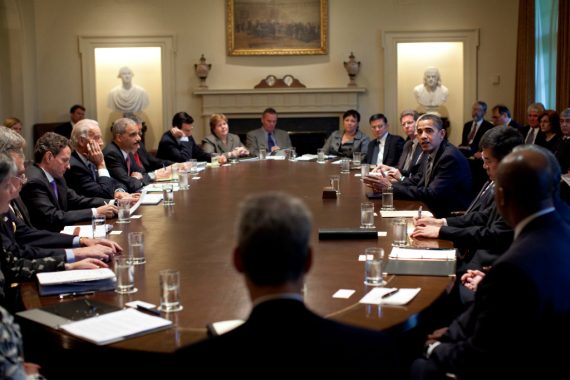 Todd Purdum has an interesting piece in the upcoming issue of Vanity Fair in which he argues that, at least under President Obama, the President’s cabinet has become more of a “Team Of Mascots” than the “Team Of Rivals” that the President said he was building when he won the election forty three months ago:

With a few prominent exceptions—Gates, whom he held over at the Pentagon, to broad acclaim; Clinton, who has become a highly effective secretary of state; Timothy Geithner, who left the Federal Reserve Bank of New York to become the influential Treasury secretary and part of the president’s inner circle (but also a lightning rod for criticism that the administration is too deferential to Wall Street); and Leon Panetta, an old Washington hand who first ran the C.I.A. and is now secretary of defense—Obama has surrounded himself mostly with a team of loyalists. They range from the very competent (Janet Napolitano at Homeland Security) to the perennially controversial (Eric Holder at Justice) to the underwhelmingly anonymous (could anyone but a union leader pick Labor Secretary Hilda Solis out of a lineup?). In the main, Obama relates to his Cabinet the way he relates to the rest of the world. “He’s a total introvert,” the former adviser told me. “He doesn’t need people.” So it hardly matters that Kathleen Sebelius, the secretary of health and human services, is widely seen as quietly capable; she was not front and center in Obama’s public push for health-care reform, a topic that another former senior administration aide now calls the Lord Voldemort of policy questions, the issue that must not be named. Arne Duncan gets high enough marks as education secretary (and is a friend and basketball teammate of the president’s), but his profile is comparatively low. As executive director of the Colorado Department of Natural Resources in the cabinet of Governor Roy Romer, 20 years ago, Ken Salazar played a key political advisory role; he plays no comparable role as interior secretary today. None of the domestic Cabinet officers are reliable regulars on the Sunday talk-show circuit (nor were they in the second Bush administration). The administration prefers to offer up senior White House aides, over whom it has tighter control, and who may actually know more about the president’s real agenda. Obama’s Cabinet secretary, Christopher Lu, has been known to say that it’s his job to tell Cabinet members they can’t do things, one former colleague recalls, adding that there is a feeling in the White House that people in the Cabinet “are creating headaches for the president,” whether it’s Lisa Jackson promulgating a new rule at E.P.A. or Ray LaHood floating the idea of a mileage-based tax to pay for highway projects at Transportation or Eric Holder filing a reply brief—never mind the reality that it is the job of the E.P.A. administrator to promulgate rules, and of the attorney general to involve himself in court proceedings.

As Purdum goes on to note, the role of the President’s Cabinet has changed significantly from those days when Washington held forth with Jefferson and Hamilton, when Lincoln used his “Team Of Rivals” as a means of keeping political forces in check as he desperately tried to reunite a nation that had come apart at the seams, or when Franklin Roosevelt’s cabinet worked together during the Great Depression and World War II. Once World War II gave way to the Cold War, though, the relevance of the Cabinet as a team of advisers to the President declined significantly. Today, President’s rely far more upon their political advisers for advice in this regard, or indeed on whatever informal “kitchen cabinet” that may have formed around them even before they entered office. Especially when you’re talking about Departments like Labor, Commerce, Energy, and Health And Human Services, Cabinet Secretaries today are more managers of one of the many divisions of the Executive Branch than they are front line advisers to the President.

There are, to be sure, exceptions. As Purdum notes in the excerpt above, President Obama maintains close ties with the heads of the “core” Cabinet Departments — State, Treasury, and Defense — which also happen to be three of the four original Cabinet Departments. This has been true of all recent Presidents and is likely to remain the case for the foreseeable future. The reasons for this are completely understandable, though. The economy, diplomacy, and military affairs constitute the three most important areas of Presidential concern, indeed the ones in which the Presidency has the most discretion and power. It makes sense that any President would maintain close ties to the heads of these departments, and that the people he appoints to them would be the ones most scrutinized for qualifications and fitness for office. Even in these policy areas, though, it’s worth noting that the President has other advisers that he can consult with that are often more powerful than their Cabinet equivalents. In addition to the President’s political advisers, on the economy he can consult the head of the Council of Economic Advisers. In the areas of diplomacy and defense, there’s the National Security Adviser (indeed there have often been conflicts between the Presidents NSA and his or her counterparts at State and Defense). Attorneys General have also enjoyed historically close relationships with the White House, but that has changed significantly since Watergate and President’s tend to rely on the Office Of White House Counsel for legal advice today. But, how often, really, does a President need to meet with the Secretary of Housing and Urban Development, or the Secretary of Veterans Affairs? Surely, if there’s a major policy initiative or a crisis that concerns their area of responsibility, they will be involved. For the most part, though, contact with these officials will be through the President’s staff, especially the Chief of Staff and his or her Deputies. Add into this mix the fact that cabinet meetings are by no means common events, and it’s really quite understandable why President Reagan might not have recognized his Secretary of Housing and Urban Development as the two passed each other in a White House hallway after a meeting a of big city Mayors.

There is, of course, a danger in this relatively recent phenomenon of President’s becoming more and more reliant on personal staff while keeping Cabinet Secretaries out of the loop. Unlike members of the White House Staff and the President’s personal advisers, Cabinet Secretaries must be confirmed by the Senate and are subject to Congressional oversight. The ability of Congress to bring members of the President’s staff in to testify before a Committee are far more constrained thanks to the bounds of Executive Privilege and the principles of Separation Of Powers. To the extent the President relies more and more on these advisers, it enables him to shield his decision making processes from Congressional review, and that’s not a good thing. Unfortunately, the modern Cabinet has evolved into what it has become, and it’s unlikely to change any time soon.