After a two-year investigation, the Inspector General of the Department of Justice found no basis for the conspiracy theories being pushed by the Republicans regarding the Russia investigation.

The Department of Justice’s Inspector General released a report resulting from a two-year-long investigation of the genesis and conduct of the investigation into Russian interference in the 2016 Presidential campaign that discredits all of the conspiracy theories and accusations that President Trump and his Republican acolytes have been pushing regarding that investigation from the beginning:

The 434-page report issued Monday by Justice Department Inspector General Michael Horowitz concluded that the FBI had an “authorized purpose” when it initiated its investigation, known as Crossfire Hurricane, into the Trump campaign. In doing so, Horowitz implicitly rejected assertions by the president and fellow Republicans that the case was launched out of political animus or that the FBI broke its own rules on using informants.

As the probe went on and the FBI sought court approval to surveil a former campaign aide, officials repeatedly emphasized damaging information they heard about Trump associates and played down exculpatory evidence they found, the report said. The bureau promptly indicated that it would implement dozens of corrective measures in response to Horowitz’s report and that disciplinary action remains a possibility.

Conservatives and liberals alike claimed victory after the report’s release — with Republicans asserting that it exposed serious wrongdoing while Democrats said it validated the Russia investigation. Trump called the report’s findings “far worse than anything I would have imagined.”

The report, which was based on more than 1 million documents and more than 170 interviews, is the most exhaustive assessment to date of the investigation that roiled Trump’s presidency and would ultimately be overtaken by special counsel Robert S. Mueller III. But in the minutes after the document was released, it became clear that the report would not be the last word.

In a statement, Attorney General William P. Barr disagreed with one of the inspector general’s key conclusions, saying the FBI launched an investigation of a presidential campaign “on the thinnest of suspicions that, in my view, were insufficient to justify the steps taken. It is also clear that, from its inception, the evidence produced by the investigation was consistently exculpatory.”

So, too, did Connecticut U.S. Attorney John Durham, whom Barr handpicked to conduct an investigation similar to that of Horowitz. “Our investigation has included developing information from other persons and entities, both in the U.S. and outside of the U.S.,” Durham said in a statement. “Based on the evidence collected to date, and while our investigation is ongoing, last month we advised the Inspector General that we do not agree with some of the report’s conclusions as to predication and how the FBI case was opened.”

Durham’s investigation is ongoing — and what evidence he has to rebut Horowitz remains unclear. Some involved in the Russia case said they were mystified by his statement.

A draft of the inspector general’s report contained a footnote saying Horowitz had asked Durham whether he had evidence to support a right-wing theory that the investigation began as a setup by U.S. intelligence using a Maltese professor to entrap the Trump campaign, according to people who saw the draft. Durham said he did not, the people said. That note about the probe’s origins, though, does not appear in the publicly released version of the document. The report has some redactions, but it is unclear if that section was removed or blacked out.
Speaking Monday on MSNBC, former FBI director James B. Comey took aim at Durham, saying he “can’t make any sense” of Durham’s statement disagreeing with the inspector general and predicting that if the prosecutor does not find information to satisfy Trump, someone will be assigned to investigate him.

“Don’t be a part of the sliming of the IG and the department as a whole,” Comey said. “Do your work.”

To be fair, while the report rejected the notion that the Russia investigation had no basis in fact, and that it was based on a “Deep State” effort to undermine the Trump campaign in 2016, it did find some problems with the FISA process related to the surveillance of former Trump adviser Carter Page:

Horowitz was particularly critical of applications the FBI made to the Foreign Intelligence Surveillance Court to monitor former Trump campaign adviser Carter Page, asserting that those applications contained “significant inaccuracies and omissions” and that agents “failed to meet the basic obligation” to ensure the applications were “scrupulously accurate.”

The inspector general found that “so many basic and fundamental errors were made by three separate, hand-picked teams on one of the most sensitive FBI investigations that was briefed to the highest levels within the FBI,” he concluded that there was a failure of “not only the operational team, but also of the managers and supervisors, including senior officials, in the chain of command.”

Among those failures was the growing body of information the FBI had gathered suggesting that former British spy Christopher Steele — whose reports were a key element justifying the surveillance of Page — was not as reliable a source as officials had described to the court.

“As the FBI obtained additional information raising significant questions about the reliability of the Steele election reporting, the FBI failed to reassess the Steele reporting relied upon in the FISA applications, and did not fully advise” Justice Department officials of those issues.

As a result of those findings, Horowitz has launched a broader audit of FISA work, to study how systemic those problems may be for FISA applications in counterintelligence and counterterrorism cases. He did not, however, conclude that the bureau’s applications to monitor Page should have been rejected.

“We do not speculate whether the correction of any particular misstatement or omission, or some combination thereof, would have resulted in a different outcome,” the report said. “Nevertheless, the Department’s decision-makers and the court should have been given complete and accurate information so that they could meaningfully evaluate probable cause before authorizing the surveillance of a U.S. person associated with a presidential campaign.”

As Mark Mazzetti at The New York Times notes, though, the release of the Inspector General report has not caused the President and his supporters to take back their previous accusations. Instead, it has led them to dig in even further, and to pin their hopes on the results of another investigation:

WASHINGTON — President Trump and his allies spent months promising that a report on the origins of the F.B.I.’s Russia investigation would be a kind of Rosetta Stone for Trump-era conspiracy enthusiasts — the key to unlocking the secrets of a government plot to keep Mr. Trump from being elected in 2016.

On that point, the report by the Justice Department’s inspector general, Michael E. Horowitz, did not deliver, even as it found serious problems with how F.B.I. officials justified the surveillance of a Trump campaign aide to a federal court.

But by the time it was released, the president, his attorney general, his supporters in Congress and the conservative news media had already declared victory and decamped for the next battle in the wider war to convince Americans of the enemies at home and abroad arrayed against the Trump presidency.

They followed a script they have used for nearly three years: Engage in a choreographed campaign of presidential tweets, Fox News appearances and fiery congressional testimony to create expectations about finding proof of a “deep state” campaign against Mr. Trump. And then, when the proof does not emerge, skew the results and prepare for the next opportunity to execute the playbook.

That opportunity has arrived in the form of an investigation by a Connecticut prosecutor ordered this year by Attorney General William P. Barr — and the president and his allies are now predicting it will be the one to deliver damning evidence that the F.B.I., C.I.A. and even close American allies conspired against Mr. Trump in the 2016 election.

Mr. Barr made clear his thoughts on the inspector general’s report on Monday in a blistering public statement in which he described how the F.B.I. in 2016 “launched an intrusive investigation of a U.S. presidential campaign on the thinnest of suspicions” and carried out surveillance “deep into President Trump’s administration.”

He chose to leave out the fact that the inspector general had found that the F.B.I. had solid reason to open its investigation, choosing instead to say that in his view there was insufficient reason “to justify the steps taken.”

The attorney general’s comments echoed his statements after the conclusion of the investigation by Robert S. Mueller III, the special counsel. In a significant political victory for Mr. Trump, the special counsel found that there was no criminal conspiracy between the Trump campaign and Russia, and did not make a judgment about whether Mr. Trump had obstructed justice.

But Mr. Barr went further, suggesting that the president had been a victim of America’s law enforcement machinery and pledging to investigate the origins of the inquiry.

The man he has asked to lead that investigation, John H. Durham, the United States attorney in Hartford, Conn., chummed the waters on Monday by releasing a highly unusual statement saying he disagreed with some of the findings of the inspector general’s report and had a mandate to conduct a broader, more thorough investigation.

Mr. Durham is carrying out his inquiry in the heat of a presidential campaign, raising the prospect that Mr. Trump could seize on his findings should they come out in the months or weeks before the 2020 election.

As Mazzetti goes on to note, this fits into a pattern we’ve seen from the Administration and the GOP:

In early 2018, Republicans fueled speculation that the release of a document written by Mr. Nunes would prove widespread F.B.I. surveillance abuses during the 2016 campaign and show how the bureau opened its Russia investigation based on a dossier of uncorroborated information provided by a former British spy, Christopher Steele.

Mr. Trump’s allies used the F.B.I.’s objections to the release of the Nunes memo to promote a Twitter campaign —#releasethememo — and in February of last year Mr. Trump ordered it declassified.

It landed mostly with a thud, and it even ended up debunking the claim that the dossier was the origin of the F.B.I.’s Russia investigation. The Nunes memo confirmed press reporting — that the investigation began after a Trump campaign aide told an Australian diplomat that the Russian government had obtained thousands of emails from Mr. Trump’s Democratic opponent, Hillary Clinton.

But the president’s allies soon found another opportunity: the Justice Department’s announcement of an investigation into the origins of the Russia inquiry led by Mr. Horowitz. It would be this investigation, they predicted, that would reveal the depths of the F.B.I.’s perfidy.

Inevitably, it’s likely that when the investigation being conducted by U.S. Attorney for Connecticut John Durham fails to find the conspiracy that the President and others have been pushing, they’ll reject that and demand some other investigation. This isn’t unlike how Republicans acted during the Obama Administration with respect to matters such as the Fast & Furious investigation, the investigation of IRS targeting of conservative organizations, and of course the seemingly endless Benghazi investigation, which was investigated by six separate committees that failed to find any wrongdoing before being investigated by a Select Committee in the House of Representatives that found exactly the same thing. As with these previous investigations, the Republicans have already made up their minds and nothing is going to sway them from changing their minds.

Attorney General Opens Another Investigation Into Origins Of Russia Probe 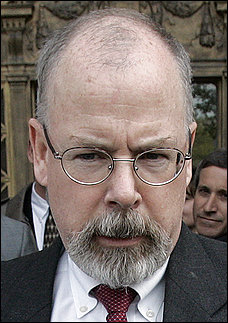