Was Dem presidential hopeful John Kerry seen this weekend waving a gun which would have been banned if legislation he co-sponsored became law?
Kerry co-sponsored S. 1431 last year (Ã¢€œThe Assault Weapons Ban and Law Enforcement Protection Act of 2003) which would have banned a “semiautomatic shotgun that has a pistol grip.Ã¢€ Opponents of the bill successfully argued how nearly all guns have “pistol grips,” inluding millions of Browning Auto-5 shotguns produced since 1903.

Photos show Kerry’s hand resting on the “pistol grip,” as loosely defined in the bill. 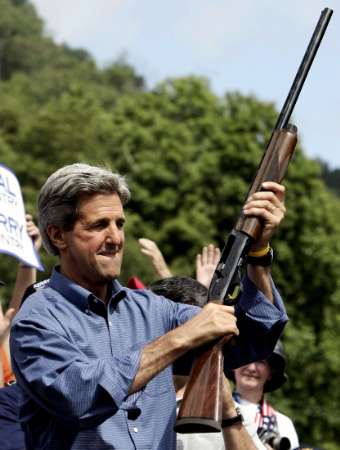 It’s not insignificant that Kerry’s bill didn’t pass and therefore isn’t the law.

Regardless, while the photos Drudge provides are rather shadowy, I don’t actually see a pistol grip on the weapon in question. Kerry appears to be holding the stock. The definition from the bill is indeed vague:

(42) PISTOL GRIP- The term `pistol grip’ means a grip, a thumbhole stock, or any other characteristic that can function as a grip.

Still, I don’t see anything in the picture that seems meet it. Contrast it with a shotgun with an actual pistol grip:

Kerry was presented with the gun during a Labor Day stop in Racine, West Virginia. “I thank you for the gift, but I can’t take it to the debate with me,” Kerry told a cheering crowd as he held up the device.

The man should probably refrain from unscripted attempts at humor.

[Kerry’s gun bill would also ban any “gift” transaction. It is not clear if Kerry submitted to a waiting period and completed the required paperwork (a 4479 form) or Brady background check before he claimed the gun. Also, since the Gun Control Act of 1968 was passed, it has been illegal for an unlicensed individual (a non-dealer, non-collector, non-manufacturer, etc.) to obtain a firearm in a state in which you are not a legal resident.]

The Brady Law applies to handguns, not shotguns. The Gun Control Act of 1968 is very long but as best I can tell it only precludes the sale of firearms out of state.

Update (1350): Juan Non-Volokh points out some of the same errors in Drudge’s story and notes that Drudge has now changed much of the story–although without acknowledging that he’s done so. Interestingly, the National Rifle Association links Drudge’s initial story without comment.

Update (9/8 1055): Donald Sensing has a more detailed discussion of the issue.