Matthew Yglesias looks at the current state-by-state numbers and concludes that Kerry is in exceedingly good shape.

The general dynamic, I think, is that Bush needs to defend many fronts — Nevada, Arizona, Missouri, Ohio, West Virginia, Florida, New Hampshire (82 electoral votes) — while Kerry really only needs to play defense in Iowa and Wisonsin (17 electoral votes). What could change this dynamic is if the Nader campaign picks up steam and re-produces the artificially close results we saw last time in Maine and the Pacific Northwest. 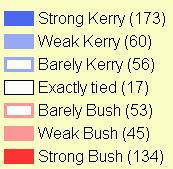 According to my handy-dandy calculator, this means 289 Kerry, 232 Bush, and 17 undecided right now. The “barely” states are all within the margin of polling error, so rather dubious to include into the calculation, but there’s no really good way to do it otherwise at the moment.

Like Matt, I’m rather confident that Tennessee’s 11 EV’s will ultimately go to Bush, notwithstanding the fact that they’re currently in the “barely Kerry” column. That would switch the decideds to 278-243. Arizona’s 10, Missouri’s 11, and West Virginia’s 5 will almost certainly go to Bush, shifting it to 252-269. Since 270 is the magic number, Bush is in decent shape, considering his convention is yet to come while Kerry’s has come and gone without a measurable “bounce.”

Still, I agree with Matt: the math favors Kerry. Ohio’s 20 and Florida’s 27 EVs are in the “weak Bush” category. Bush won both states in 2000, Ohio closely and Florida by a whisker. He needs to hold both–or pick off Pennsylvania–to stave off Kerry. If Bush takes all three states, which is not out of the realm of possibility, he’ll win easily. But just a little bad news at the wrong time, or a poor performance in the debates, could just as easily cause him to lose all three.

PoliBlogger takes a crack at handicapping the 2004 presidential contest. He notes that, were the 2000 election to repeat itself exactly, Bush would gain 7 electoral votes simply by virtue of reapportionment (the fact that several states, mainly in the Democrat dominated northeast lost population which mainly shifted to the Republican dominated Sun Belt). He also speculates the very close states from last go-around would all likely go to Bush, given his popularity and incumbency. All of this would give Bush a comfortable win.

Of course, as he notes, the election isn’t going to be held today and a lot could happen. If Bob Graham were to somehow win the nomination, he would have to be the favorite in Florida; otherwise, it should be Bush’s to lose.

The really interesting question to me is California. There was a time, not so long ago, when that state routinely voted Republican for president. Indeed, that fact and the party’s strong showing in the South and Mountain West were thought to give the GOP an “Electoral College lock.” Clinton picked that lock in 1992, repeated in 1996, and Gore won in 2000. What changed? The end of the Cold War. Now that national security is back in play as a key issue, arguably the key issue, it is not out of the question that Bush could win the Golden State next year, especially if the economy gets back into gear.