England is a Fag Country

Archie Bunker informed us decades ago that “England is a fag country.”

Andrew Sullivan — an Englishman and proud homosexual — verifies this for us:

The Conservative Party in Britain now has eleven openly gay members of parliament and nine more in a glass closet. Compare that with zero for the Republicans and three for the Democrats, and no-one in the upper reaches of the Obama administration. One of the new Tories is an open lesbian. Two gay Tories are ministers — and both friends of mine. No one seems to be terrified of acknowledging this or reporting it — in fact, the party is deeply proud of this new diversity. I am too — as a Tory, a native Brit and a gay person. To see prejudice vanquished in such a way that the Tories now have more openly gay MPs than Labour is a real Cameron achievement — built on accepting the social changes that Thatcher unwittingly unleashed and Blair solidified.

All joking aside, this is indeed quite remarkable.

But how did it come to be?  Granting that the House of Commons is somewhat larger than the combined U.S. House and Senate, how can the numbers be that different?   Sure, there are parts of the country that where religious fundamentalism makes it hard for gays to run for office; but one imagines that’s true in the UK, too.  But there are numerous urban centers in the United States where gays have lived openly since before Archie Bunker went on the air.  And whole swaths of the country where rugged libertarianism is the norm.   How come some few open gays are in senior positions in American politics?

Beyond that, and this is perhaps unknowable, one presumes that the proportion of actual homosexuals in the two countries and the two governments is roughly equal.  If so, then the difference is Closeted vs. Uncloseted rather than Gay vs. Straight. 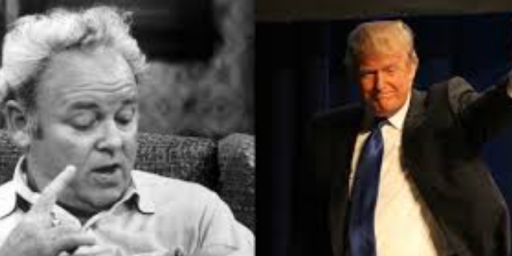