Back in 1982, the parents of Eldridge “Tuck” Hord III commissioned a photo of their son upon his graduation from the Naval Academy. Upon his departure from the Pentagon as a captain 23 years later, a legend was born. 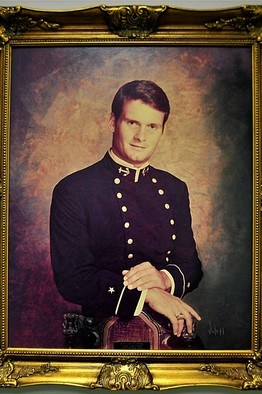 Several of Capt. Hord’s work colleagues attended the 2004 party, including a British captain who smuggled the portrait into his car and put it on display at the office. Capt. Hord, amused, called it an act of “buffoonery.”

The portrait then started making surprise appearances at events when Capt. Hord was in attendance. It attended his 2005 farewell party when he left the Pentagon office to take a new post in Diego Garcia, an Indian Ocean atoll where the Navy has a base.

He left the portrait with his officemates, who placed it on the wall above his old desk.

“I was expecting to be questioned by the Pentagon police why I was taking the picture out of the building and instead was helped through the barrier!” Commodore Bullock recalled.

After the party, Capt. Hord refused to take ownership of the portrait, Commodore Bullock said. “I think the contrast between the Ens. Hord and the retiring Capt. Hord was too much for him!” he added.

Back on the wall in the office, visitors often asked who it depicted. “They all looked at it and said, ‘Man, what year was that? It looks like the 1800s,’ ” said Canadian Lt. Col. Brook Bangsboll.

That was the light-bulb moment. On one of his last days at the Pentagon, Lt. Col. Bangsboll went to a jewelry shop to have a brass plaque engraved, egged on by colleagues and co-conspirators. “We didn’t know what to do so we said, ‘Let’s just lose him at sea,’ ” Lt. Col. Bangsboll said. “It makes it interesting and kind of mysterious.”

He kept the circumstances of the ensign’s death vague because he thought some nosy Navy historian would spot the ruse if the plaque cited a specific battle.

The jeweler made a typo, engraving “Chuck” instead of “Tuck.” Lt. Col. Bangsboll felt that was fitting, given the surreptitious nature of his endeavor. It read:

Lt. Col. Bangsboll scouted the halls for the right spot. He planned to put the portrait in a foyer dedicated to logistics—the office’s specialty—but feared those responsible for displays in the area would catch on.

He settled on a previously unadorned hallway which gets less foot traffic. At 6:15 a.m. on July 29, 2011, Lt. Col. Bangsboll spirited the portrait to the hallway and drove a large screw into the wall.

“The place was quiet,” he recalls. “No one noticed.”

For the next seven months, the portrait attracted little attention. One Pentagon official, as he walked by the photo, said it had never crossed his mind to look twice.

Apparently, the modern haircut eventually aroused suspicion. Reporter Adam Entous is surely safe in his pronouncement that this “may be the greatest—or perhaps only—prank in Pentagon art history.”