Equal Rights For Muslims Not Popular

Barely half of Americans think Muslims have a Constitutional right to build a mosque near the World Trade Center and 18% think mosques shouldn't be allowed anywhere. That's why we have a 1st Amendment.

Patrick Appel finds an Economist poll showing that barely half of Americans think Muslims have a Constitutional right to build a mosque near the World Trade Center site “depressing but not surprising.”

He names this Chart of the Day: 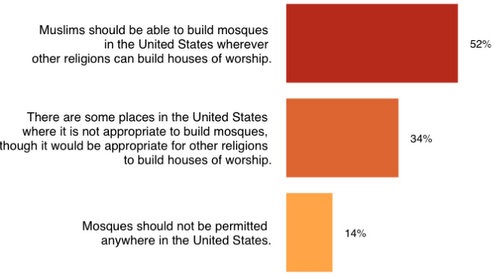 I’m going to reiterate what I said earlier about same-sex marriage, which is that prejudice does not cease being prejudice because it is widely held. Among both parties, prejudice against Muslims is widely held, and instead of tamping down this kind of sentiment, Republican leaders are exploiting it for political gain, and many Democrats are following along.

Finally, the point of constitutional rights is that they aren’t subject to the capricious whims of contemporary political anger. They exist to protect everyone, but they exist particularly to protect the rights of the minority against the tyranny of the majority, precisely because popular people and ideas rarely need protecting.

Quite right.  And it has always been thus.   The whole point of limited government in a democracy is to prevent the majority from enacting its prejudices into law.  There are things that are up for a vote and then there are “certain unalienable Rights.”    Attempts to quash the rights of an unpopular religion or ethnic group will ultimately not stand.

It’s not shocking that Republican leaders are more apt to stoke these cultural prejudices than Democrats.  Cultural conservatives are, almost by definition, opposed to the drive by other cultures to increase their influence.   It’s somewhat interesting, though, that Independents are more respectful of our fundamental principles than those who identify with either party. 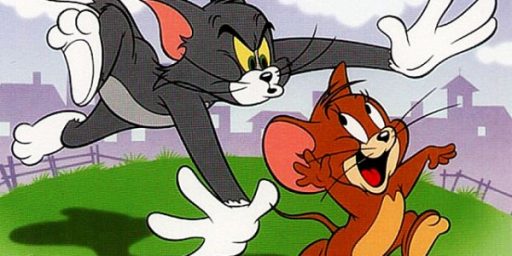