The methods used to execute condemned criminals in California and Florida are under scrutiny.

Gov. Jeb Bush suspended all executions in Florida after a medical examiner said Friday that prison officials botched the insertion of the needles when a convicted killer was put to death earlier this week.

Separately, a federal judge in California imposed a moratorium on executions in the nation’s most populous state, declaring that the state’s method of lethal injection runs the risk of violating the constitutional ban on cruel and unusual punishment. U.S. District Judge Jeremy Fogel ruled in San Jose that California’s “implementation of lethal injection is broken.” But he said: “It can be fixed.”

In Florida, medical examiner Dr. William Hamilton said Wednesday’s execution of Angel Nieves Diaz took 34 minutes — twice as long as usual — and required a rare second dose of lethal chemicals because the needles were inserted clear through his veins and into the flesh in his arms. The chemicals are supposed to go into the veins. Hamilton, who performed the autopsy, refused to say whether he thought Diaz died a painful death.

Orin Kerr‘s summation of the California ruling is amusing:

While it’s far from clear that an immediate and pain free death is constitutionally required for convicted murderers, it’s a worthy enough goal. Still, it is a bit surreal considering the horrific deaths these people put their victims through.

Although perhaps not as surreal as the LAT Web page containing their version of the story. The juxtaposition of half naked showgirls in two separate ads for “Dreamgirls” and another ad for an island vacation getaway and discussion of putting condemned men to death is rather creepy. 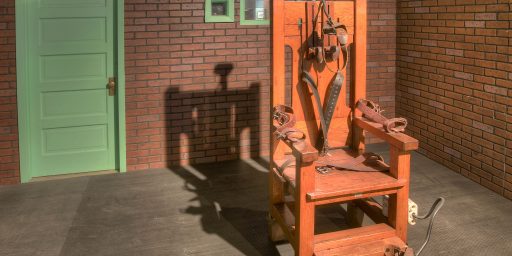 Tennessee Brings Back The Electric Chair