Rock Diaz likes to wear Army cammies and "Marine Corp" dog tags when he flies. The portly Long Island man has never served in the military.

Rock Diaz likes to wear Army cammies and “Marine Corp” dog tags when he flies. The portly Long Island man has never served in the military.

NY Post (“LI man busted for ‘pretending’ to be soldier to get first-class upgrade“): 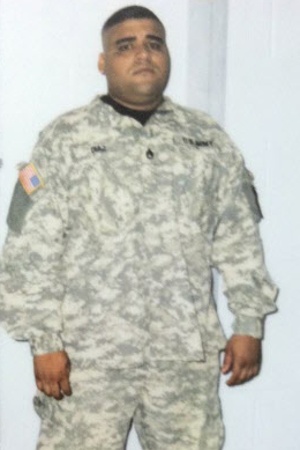 A Long Island man was arrested for donning an Army uniform and brazenly posing as a soldier so he’d get bumped up to first class on a flight to JFK from the Dominican Republic, Port Authority cops have charged.

Rock Diaz, 22, of Freeport, has a history of pretending to be a military man to get VIP treatment, cops said — he once even smooth-talked his way into a jetliner’s cockpit, where he was photographed sitting at the controls wearing a goofy grin.

The mile-high huckster was finally brought to earth Friday afternoon when a sharp-eyed customs official at JFK asked him his rank — and he gave an answer that didn’t match the insignia on the uniform he was wearing.

“If you knew anything about the military and you looked at him, you could tell he wasn’t really a soldier,” a cop said.

But Diaz — in camouflage fatigues and sporting a military-style buzz cut — allegedly insisted he was the real thing when questioned after getting off an American Airlines flight.

Asked his rank, he said “E-5,” referring to a pay grade. But Diaz was wearing the insignia of a staff sergeant, the source said, which is “E-6,” a higher pay grade. He also couldn’t say where he was stationed, sources said.

Although he was wearing a standard-issue “Army Combat Uniform” and cap, he could not produce a military ID.

Diaz — who sources said never served in the military — also had a black POW patch on his sleeve, which an actual soldier would never wear in that spot, the sources said.

And his “dog tags” were comically engraved with the words, “U.S.A. Marines Corp.”

The faux soldier allegedly admitted he had pulled the scam at least once before — when the cockpit photo was taken in December 2009. Other photos obtained by The Post show him wearing the uniform in Haiti and elsewhere.

Interviewed yesterday, the Spanish-speaking Diaz claimed he did nothing wrong and blamed any confusion on a language barrier.

“I never asked to get upgraded. The stewardess offered me a new seat and I asked why? They explained it to me in English and I did not understand,” Diaz said. “I moved where they told me to sit.”

He was charged with second-degree impersonation.

Like Outside The Wire‘s Joe Gould, I’m not pleased with the “clueless phony soldier.” Still, judging by the photo, it’s easy to see that he’d feel cramped in coach.

And, I’m sorry, it’s hard to give too much credit to the “sharp-eyed Customs official.” A fat slob traveling without military ID isn’t exactly a dead ringer for an American soldier.