Falling Out of Love With Obama In Berlin, hundreds of thousands will cheer a projection rather than a flesh-and-blood Obama on Thursday. After Inauguration Day, alas, Europe and the world will not face a Dreamworks president, but the leader of a superpower. Whether McCain or Obama, the 44th president will speak more nicely than did W. in his first term. He will also pay more attention to the “decent opinions of mankind.” But he will still preside over the world’s largest military, economic, and cultural power.

This vast power differential is what Germans and Europeans don’t quite fathom in their infatuation with Obama. Their problem was not Mr. Bush, but Mr. Big–America as Behemoth Among the Nations, unwilling to succumb to the dictates of goodness that animate post-heroic, post-imperial, and post-sovereign Europe.

That’s exactly right.  Nor is it Euro-bashing.  I’m a professional transatlanticist these days maintained, even in the most fractious days of the fight over the decision to go to war in Iraq, that the United States and Western Europe had far, far more in common than divided us. But the fact remains is that our geostrategic interests don’t always align and we’ve got the means and will to pursue goals regardless of whether they’re with us.  That, in turn, naturally frustrates them.

Beyond that central point, highlighted and brought to my attention by Patrick Appel, Joffe points out that Obama’s not the pliant, meek fellow that the Germans imagine and are feting with rock star fervor.

Obamania is not about politics, but about desire, dreams, and projections. Obama is not so much a candidate as a canvas, a vast surface onto which Europeans (and half of the U.S. electorate) can paint their fondest fantasies. There hasn’t been anything like it in Western politics since … since … Jack (“Ich bin ein Berliner”) Kennedy, the president Barack Obama so self-consciously mimics, down to the tilt of his head and the inflection of his voice.

This isn’t the “empty suit meme” that Kevin Drum decries but rather a recognition that, while Obma may well be a master politician, he’s still a politician.  And an American one at that.

There are two problems buried in this fantasy. One, Barack Obama is possessed of a pliable identity that oscillates between Barry and Barack, between White and Black, between the Harvard Law Review and the Chicago slums, between a leftish voting record in the Senate and a right-of-center message on the stump. He is neither saint nor softie, but the most consummate power politician to come out of Chicago since Richard Daley the Elder. Following classical electoral ritual in the U.S., Obama has been moving steadily to the right, be it on the death penalty, gun control, or Iraq. Europeans haven’t quite processed his pilgrimage to the center, and if they have, they seem not to care.

A President Obama would almost surely remain more popular in Europe than President Bush. Then again, that’s a low bar.  Given the degree over overseas action the next American president will doubtless be involved with — and the tension this will likely engender — it’s unlikely, though, that he’d be as popular there as Bill Clinton. 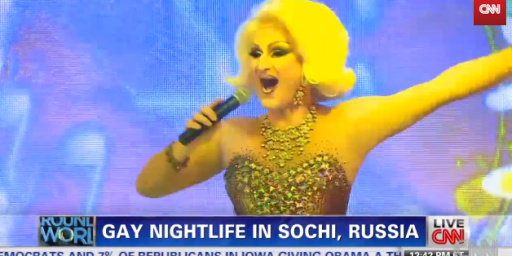