NYU's Geoffrey Miller has done a groundbreaking study connecting obesity, and particularly the consumption of simple carbohydrates, with failure to complete doctoral dissertations.

NYU’s Geoffrey Miller has done a groundbreaking study connecting obesity, and particularly the consumption of simple carbohydrates, with failure to complete doctoral dissertations. Well, actually, he’s just an evolutionary psychologist visiting the business school. And it was a tweet, not a study: 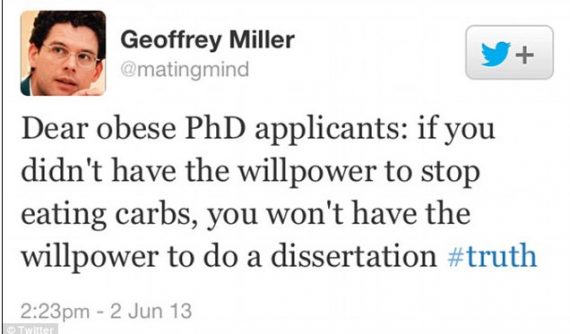 Miller, a tenured professor at the University of New Mexico, quickly deleted his tweet—but not before others had the chance to take screenshots of the message and circulate those images on various social media platforms.

Most of the people I knew in graduate school subsisted on pizza, Chinese food, and beer. Then again, most of them failed to complete their dissertation, so Miller may be on to something.

Naturally, NYU is taking this in stride:

According to the New York Observer, Miller won’t lose his post at NYU. But his future at UNM is less certain.

“We are deeply concerned about the impact of the statement, which in no way reflects the policies or admission standards of UNM,” UNM said in an official statement issued on Monday. “We are investigating every aspect of this incident and will take appropriate action.”

I’m pretty sure the “appropriate action” is doing nothing.