Fly Green: Do Your Business First

Like many things in Japan, the message is subtle. At least Japan’s All Nippon Airways (ANA) hopes it is, now that the nation’s second largest airline has started quietly asking passengers in Japanese to use the bathroom before boarding 38 domestic flights and four international flights between Tokyo and Singapore. The request is part of the airline’s “ecological flight” program, now in its fourth year, to reduce its carbon footprint by lightening planes’ loads and reducing fuel consumption. Through the month of October, ANA aims to reduce as much as 4.2 tons from going into the atmosphere by asking passengers to pack — and board — lighter.

ANA has apparently decided to spare its non-Japanese-speaking customers the potential embarrassment of pre-boarding potty talk. Though the Japanese-language announcement video at the gate for domestic departures politely advises travelers to use the bathroom before boarding, the English announcement makes no such suggestion. The English video does encourage passengers to “think about the earth and the sky above,” saying that a lighter aircraft means less carbon dioxide emissions, but stops short of suggested a pre-boarding run to the loo.

ANA spokeswoman Megumi Tezuka says she’s surprised by the attention the program has received in recent days, since the program was announced in a press release on Sept. 10. Why isn’t made to international travelers? “We didn’t think [telling people to use the restroom] was a very important point of the program,” says Tezuka. “We didn’t think there would be such big news about it.” Others of ANA’s 12 programs include recycling plastic bottles and paper cups, using lighter items in the cabin (such as plastic bottles for wine instead of glass ones) and providing chopsticks made from the wood of thinned domestic forests.

Airlines could help themselves along these lines without embarrassing announcements if they could figure out how to board and de-board passengers without trapping us aboard on the ground for 30-45 minutes on both ends of the flight.

FILED UNDER: Economics and Business, Environment 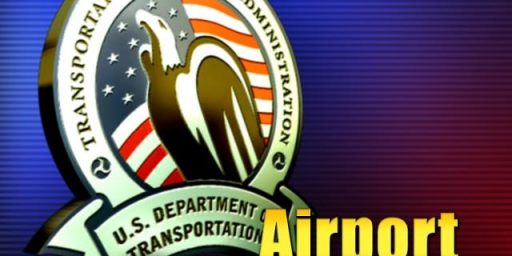