An activist group called Applied Research Center has put out a new report titled “The Color of Food,” which documents racial disparities in earnings in America’s food supply chain. In a blog post summarizing the findings, they produce this eye-opening chart: 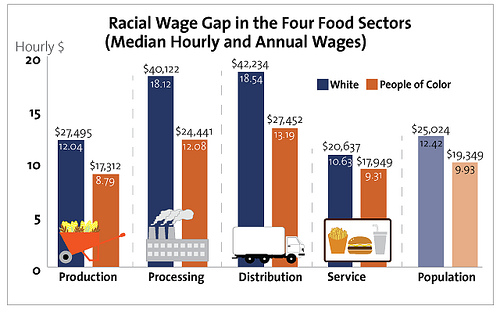 People of color typically make less than whites working in the food chain. Half of white food workers earn $25,024 a year, while workers of color make $5,675 less than that. This wage gap plays out in all four sectors of the food system—production, processing, distribution and service—with largest income divides occurring in the food processing and distribution sectors. Women working in the food chain draw further penalties in wages, especially women of color. For every dollar a white male worker earns, women of color earn almost half of that.

None of this will surprise anyone who’s been paying attention. But it would be a mistake to conclude that the wage gap is based on racial discrimination rather than broader societal inequities.

Skimming through the full report [PDF], there’s no evidence that even obvious variables aside from race and gender were accounted for. For example, one would expect those with MBAs to make more than high school drop outs, since they’re likely working in different parts of the system. Similarly, there’s a huge difference between manning the cash register at Mickey D’s and being the maitre d’ at a four-star restaurant.

Even more bizarrely, the authors act as if racial groups are evenly represented in society, rather than whites being by far the modal group in the country.