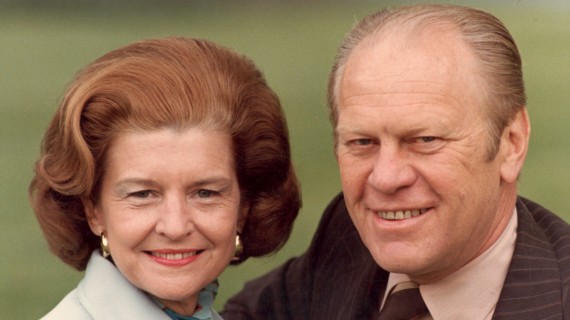 Betty Ford, the outspoken and much-admired wife of President Gerald R. Ford who overcame alcoholism and an addiction to pills and helped found one of the best-known rehabilitation centers in the nation, died Friday in Palm Springs, Calif. She was 93.

Her death was confirmed by Chris Chase, Mrs. Ford’s biographer.

“She was Jerry Ford’s strength through some very difficult days in our country’s history,” Mrs. Reagan said, “and I admired her courage in facing and sharing her personal struggles with all of us.”

Few first ladies have been as popular as Betty Ford, and it was her frankness and lack of pretense that made her so. She spoke often in support of the Equal Rights Amendment, endorsed legalized abortion, discussed premarital sex and revealed that she intended to share a bed with her husband in the White House.

When her husband’s voice failed him the morning after he was defeated by Jimmy Carter in 1976, it was she who read the official concession statement with smiling grace. And when Mr. Ford died in December 2006, it was Mrs. Ford who announced his death. The six days of national mourning returned her to a spotlight she had tried to avoid in her later years, living in Rancho Mirage, Calif., a golf community southeast of Palm Springs, and tending to her clinic there, the Betty Ford Center.

The country’s affection for Betty Ford transcended party lines. It began in earnest slightly more than two months after Gerald Ford became president in August 1974, following President Richard M. Nixon’s resignation over Watergate. Mr. Ford had been vice president for less than 10 months, named by Nixon to succeed Spiro T. Agnew, who had resigned in disgrace over accusations of bribery and tax evasion. On Sept. 28, 1974, Mrs. Ford had a radical mastectomy after doctors discovered cancer in her right breast.

Within days, 10,000 letters, more than 500 telephone calls, more than 200 telegrams and scores of floral arrangements poured into the White House and into her suite at Bethesda Naval Hospital. In the months that followed, tens of thousands of American women, inspired by Mrs. Ford’s forthrightness and courage in facing her illness, crowded into doctors’ offices and clinics for breast-cancer examinations.

After leaving the hospital, Mrs. Ford underwent chemotherapy treatment for two years. In November 1976, her physician announced that she had made a complete recovery.

Mrs. Ford was once asked if she felt sorry for herself during the trauma of losing her breast.

“No! Oh, no — heavens, no,” she replied. “I’ve heard women say they’d rather lose their right arm, and I can’t imagine it. It’s so stupid. I can even wear my evening clothes.”

She advised women facing such an operation to “go as quickly as possible and get it done.”

As The Washington Post notes, cancer wasn’t the only battle Ford fought:

In 1978, she disclosed that her use of alcohol and mood-altering prescription drugs had become a serious dependency.

In what she has described as a painful “intervention” when her family confronted her with her problem, she agreed to enter the drug and alcohol rehabilitation program at Long Beach Naval Hospital. Of that experience came the momentum to establish the Betty Ford Center in Rancho Mirage, a live-in treatment program for alcoholics and drug abusers.

As “very much a believer” in fate, she often thought about how her life and those of others suffering from cancer or alcohol and drug addictions might have played out had her husband never become president.

Alcoholism had been a ghostly companion throughout Mrs. Ford’s life, starting with her father, a traveling salesman, and continuing with a brother after he returned from World War II. It also contributed to the dissolution of her first marriage when, as she later wrote, “I probably encouraged my husband to drink.”

Although she eventually thought she was “born alcoholic” and the pressures in her life had not suddenly transformed her into one, in “Betty: A Glad Awakening” (1987), she wrote that she always saw herself as a “controlled drinker, no binges.”

“I never thought it would touch me anymore than you expect cancer or diabetes,” she said

She also argued behind the scenes against what would become Ford’s first, and most controversial, decision as President:

I was against a pardon,” she said of Ford’s decision to release Nixon from his Watergate offenses, which critics viewed as a secret deal between the two men in exchange for Nixon’s resignation.

In the end, she acquiesced to Ford’s rationale that he needed to “get the country going.” Impeachment proceedings “would have taken months in court, and he didn’t think the country could stand that kind of thing,” she said. “When you’re trying to turn things around because of the distrust and all that was out there, you’ve got to do something. And sometimes you have to do something extreme.”