Media Matters’ Eric Boehlert notes that Fox News is getting much lower ratings this campaign season than in past years and argues that it’s their “comeuppance” for their ideological approach to news coverage.

I’d say the reason is far more mundane: Their inexplicable failure to offer a high-definition (HDTV) broadcast. As prices have dropped, millions of us have bought HD sets. Figures vary, but estimates have roughly a third of US households having HDTV and that number is rapidly increasing with every passing month.

As with previous technologies, like stereo records, CD, and DVD, this his quickly outmoded old technologies. How many of us still watch movies on our VCRs or listen to our 8-tracks?

It had been quite some time since I’d watched cable news, since I find the Internet much more efficient for information gathering, but I finally turned back to it for the New Hampshire returns and was shocked to find that Fox was still broadcasting in standard def, which looks especially bad on a large screen plasma. I switched over to CNN, which has a crystal-clear hi-def signal, and never flipped back. 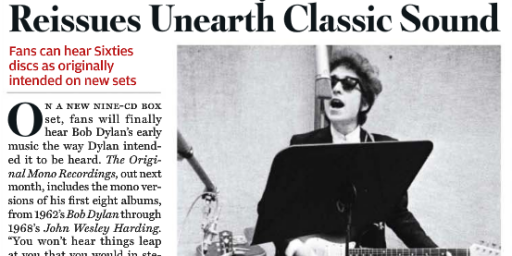