Fred Thompson seems to backhandedly acknowledge that the claims that he lobbied for an abortion rights group on a tangential matter, at first denied by his spokesman, are true in a guest column at the Power Line blog. He doesn’t address the charges head-on but notes that lawyers who run for office are often tarred by opponents with the sins of their clients. This paragraph, in particular, stood out:

The practice of law is a business as well as a profession. It’s the way you support your family. And if a client has a legal and ethical right to take a position, then you may appropriately represent him as long as he does not lie or otherwise conduct himself improperly while you are representing him. In almost 30 years of practicing law I must have had hundreds of clients and thousands of conversations about legal matters. Like any good lawyer, I would always try to give my best, objective, and professional opinion on any legal question presented to me.

That’s right as far as it goes. It’s at the essence of our adversarial system of justice.

It’s a bit disingenuous, though, in the case of a lawyer acting, not as a defense counsel for a criminal attorney, but as a lobbyist for a political group. I’ve got some friends in the lobbying business and it’s true that they are occasionally forced to advocate views they find offensive. It goes with the territory if you’re a young kid trying to make a living. At the level of a celebrity lawyer hired by the firm to drum up business, though, one surely has some discretion.

That said, though, it wouldn’t bother me in the least if the charges against Thompson are true. It would be hypocritical for a staunch pro-life candidate to have lobbied on some substantive matter for the pro abortion position, especially at the point in his career when he had the luxury of standing on principle. But Thompson’s views on abortion law have always been somewhat nuanced and the matter that he was allegedly lobbying for — a relaxation of the so-called “gag rule” which prevented government sponsored clinics from even discussing abortion as an option — is hardly a cornerstone issue.

The problem, as I noted in my initial post on this issue, is one of integrity. Issuing false denials that one has done something that, in retrospect, might be a little embarrassing and require explaining, is not what a straight talking, straight shooting, regular guy conservative (or, indeed, any honest person) does. 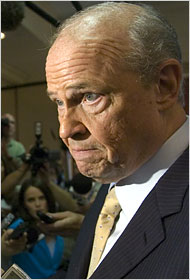