Jonathan Garthwaite passes on word that, “Fox News is reporting that Fred Thompson has told Fox he will not be participating in Thursday’s debate and may make an announcement about his candidacy soon.” WaPo’s Michael D. Shear, on a story buried on page A08, asks, “Will Thompson Roll the Closing Credits?”

As the men competing for the GOP nomination head back to Florida before the state’s primary on Jan. 29, it appears that Thompson will not be going with them. After he finished well behind in Saturday’s South Carolina primary, there were indications that Thompson could drop out as early as today. His campaign has yet to announce a schedule of Florida campaign stops.

Thompson had said repeatedly that he needed a strong finish in South Carolina to stay in the race. He failed, ending up with 16 percent of the vote, behind Sen. John McCain (Ariz.) and former Arkansas governor Mike Huckabee, and just a point ahead of former Massachusetts governor Mitt Romney.

In an election-night speech to supporters in Columbia, the normally laid-back Thompson thundered for 10 minutes about the less obvious accomplishments of his run for the presidency in what sounded much like a valedictory. “We will always be bound by a close bond because we have traveled a very special road together for a very special purpose,” he told supporters. “We’ll always stand strong together . . . we’ll always stand strong together, and I can’t thank you enough for that.”

“His rivals would do more in a day than Fred would do in a month,” said one disaffected Thompson insider. “He created the perception, fairly or not, that he was just going through the motions.”

“Thompson never filled those huge shoes from last summer’s polls, but he did manage to score well in the debates and get a respectful vote in South Carolina,” said Scott Reed, who managed Robert J. Dole’s 1996 presidential campaign.

Thompson was unable to unite the party’s right wing around his candidacy. His refusal to support a constitutional ban on same-sex marriage and questions about his lobbying for an abortion rights group raised questions for social conservatives. And his laid-back style and several early flubs on the campaign trail made others question his chances against an energized Democrat.

All that shut off the fundraising spigot for Thompson, who quickly ran out of money. After an initial stab at competing in Iowa and New Hampshire, he essentially dropped out of those contests and focused on winning the first state primary in his native South.

I suppose Thompson could hang on hoping for a Florida comeback. But why? He’s currently ranked a distant fifth in the polls there and his numbers are trending down.

The Spoof speculates that he’ll instead drop out and “play the son of Sylvester Stallone’s Rambo in next year’s Rambo V: Rambo vs Alien and Predator, and maybe Jaws.” Most likely, he’ll hope for a vice presidential bid. 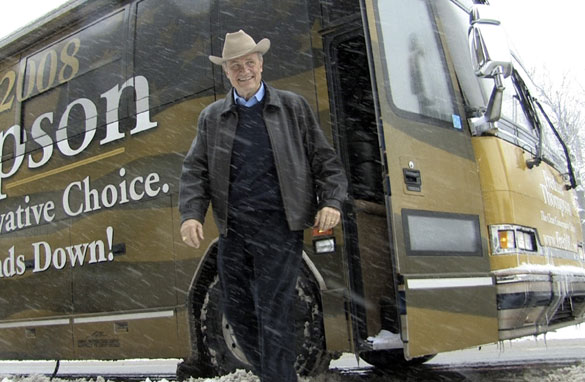