Raw Story tweeted "Republicans in Rep. Giffords' district plan to raffle off the same type of gun Jared Loughner used. " This links to their own story demonstrating that they're doing no such thing. 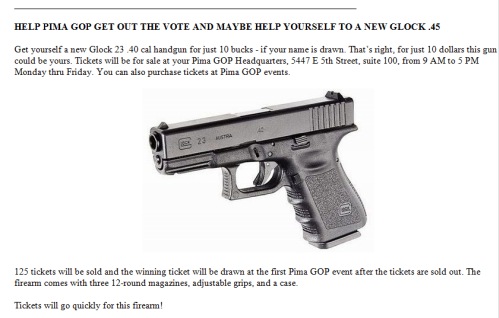 Raw Story tweeted  ”Republicans in Rep. Giffords’ district plan to raffle off the same type of gun Jared Loughner used. ” This links to their own story demonstrating that they’re doing no such thing.

The Republican Party in Arizona’s Pima County, which is represented by Rep. Gabrielle Giffords (D-AZ), is in the midst of a fundraising raffle, $10 per entry.

The prize: the same model of gun that delivered a near-fatal blast to the Democratic lawmaker’s skull outside a Tucson grocery store in January.

Tucson is in Pima County.

The local party sent out its e-newsletter late last week advertising the raffle. On the third page of the seven-page document, a large illustration of the gun appears with the headline “Help Pima GOP get out the vote and maybe help yourself to a new Glock .40.“

But, as the story goes on to tell us, the Glock being raffled off is actually not the one Loughner used:

The gun is a Glock 23, an updated model of the Glock 19 Jared Loughner used during his January 8, 2011 shooting spree that killed six and injured 13 others, including Giffords.

Now, given that six people died and nineteen people, among them Gabby Giffords, were seriously wounded in a mass shooting there a less than nine months ago, one can question the taste and judgment of the Pima County GOP. Although my strong guess is that they just thought a Glock would be a really great draw in a place where handguns are wildly popular.

There’s no mention of Giffords in the ad and, frankly, I can’t imagine that they have any interest in drawing yet more attention to the shooting that transformed her into a beloved national figure. 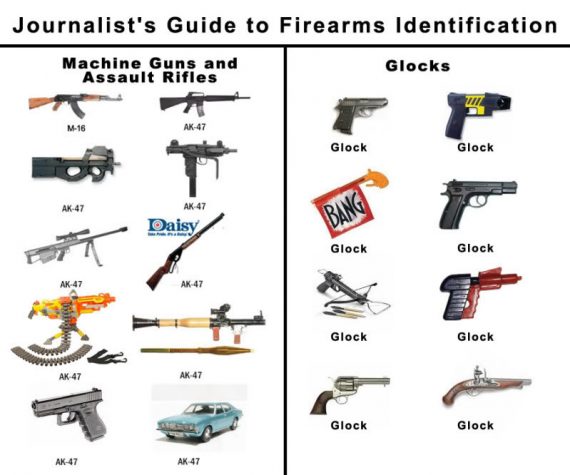 FILED UNDER: Guns and Gun Control, US Politics