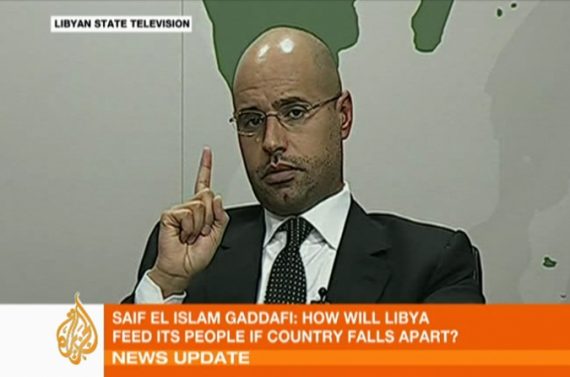 Amid reports that the country’s second largest city had fallen, Saif al-Islam, the second oldest son of Libyan leader Muammar Gaddafi addressed the nation earlier and warned of dire consequences if the protests continued:

CAIRO — The son of the Libyan leader, Col. Muammar el-Qaddafi, warned in a nationally televised address early on Monday that continued anti-government protests could lead to a civil war.

The son, Seif al-Islam el-Qaddafi, said the army continued to support his father, although he acknowledged that protesters had seized some military bases, as well as tanks and weapons.

“We are not Tunisia and Egypt,” he said in his rambling and sometimes incoherent address, referring to the successful uprisings that toppled longtime regimes in Libya’s neighbors. But he also acknowledged that the army had made mistakes during the uprising.

Hours earlier, the protests against Mr. Qaddafi’s 40-year rule spread to the capitol, Tripoli, on Sunday night, and protesters in the eastern city of Benghazi were celebrating their takeover of the city and a prominent Libyan diplomat said he was quitting to join “the popular revolution.”

Witnesses in Tripoli interviewed by telephone Sunday night said protesters were converging toward the city’s central Green Square and clashing with heavily armed riot police officers. Young men armed themselves with chains around their knuckles, steel pipes and machetes.

The police had retreated from some neighborhoods, and protesters were seen carrying police batons, helmets and rifles. Protesters had set dumpsters on fire in some neighborhoods, blocking roads. In the early evening the sounds and smells of gunfire hung over the center of the city, which is Libya’s capital, and by midnight looting had begun.

“The state has disappeared from the streets, and the people, the youth, have practically taken over,” said Monsour Abu Shenaf, a resident of Tripoli.

In Benghazi, the country’s second largest city and the starting point of the revolt, three people said that special military forces called in as reinforcements had instead decided to help the protesters take over the local army barracks. “The gunshots you hear are the gunshots of celebration,” said Abdel Latif Al Hadi, 54, a Benghazi resident whose five sons were part of the demonstrations.

The protesters didn’t seem all that convinced:

He’s threatening Libya and trying to play up on their fears. I don’t think anyone in Libya who isn’t close to the Gaddafi regime would buy anything he said. And even if there is any truth to what he said, I don’t think it’s any better than what the people of Libya have already been living with for the past 40 years. He promised that the country would spiral into civil war for the next 30 to 40 years, that the country’s infrastructure would be ruined, hospitals and schools would no longer be functioning – but schools are already terrible, hospitals are already in bad condition.