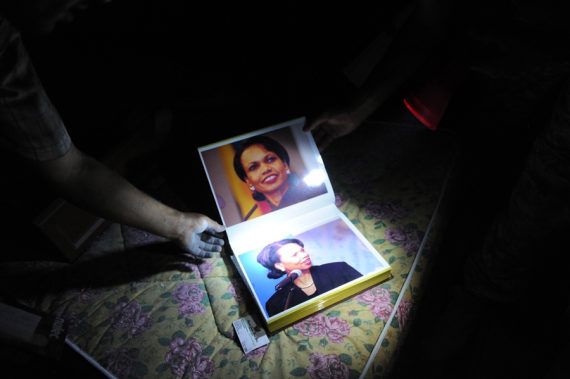 Among the odder things discovered in the ruins of Muammar Gadhafi’s is a photo album the Libyan leader kept containing nothing but pictures of Condoleeza Rice:

The ransacking of Moammar Gadhafi’s compound is turning up some bizarre loot. Following on from the Libyan leader’s eccentric fashion accessories and his edaughter’s golden mermaid couch, the latest discovery is a photo album filled with page after page of pictures of Condoleezza Rice.

The former U.S. Secretary of State paid a visit to Tripoli in 2008 during a brief interlude that saw Gadhafi begin to be welcomed back into the international fold. As Jason Ukman of the Washington Post wrote on Wednesday, ”it was only three short years ago that Rice shared a late-night dinner with Gaddafi to break the Ramadan fast, three short years ago that the United States and Libya were celebrating what was to be a new chapter in their relations.”

In a 2007 interview with al-Jazeera television, Gadhafi spoke of Rice in glowing terms. “I support my darling black African woman,” he said. “I admire and am very proud of the way she leans back and gives orders to the Arab leaders … Leezza, Leezza, Leezza. … I love her very much. I admire her and I’m proud of her because she’s a black woman of African origin.”

We’ve always known Gadhafi was an odd bird, but this is just creepy.