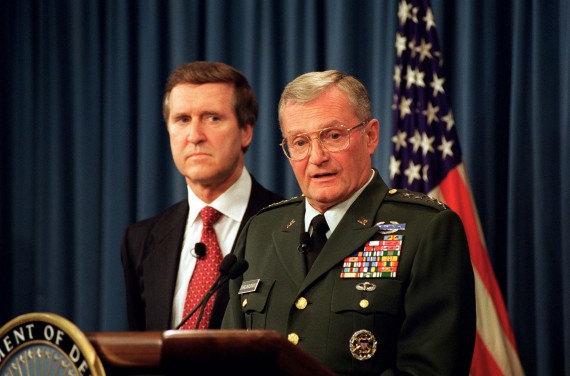 Retired General John Shalikashvili, a former Chairman of the Joint Chiefs of Staff during the 1990s, has died, CNN reported on Saturday.

A Pentagon spokesman would neither confirm nor deny his death and his cause of death was not immediately reported.

The Polish-born Shalikashvili, who was 75, came to the United States as a teenager and rose to become the highest-ranking officer in the U.S. military.

He served as Chairman of the Joint Chiefs of Staff under President Bill Clinton from 1993 to 1997, heading the U.S. role in NATO air strikes on Bosnian Serb military targets in 1995.

Shalikashvili succeeded Gen. Colin Powell as chairman of the joint chiefs. Born in Warsaw in 1936 shortly before World War Two, he fled to Germany in a cattle car in 1944 ahead of the Soviet advance.

After retiring from the military, he served as a visiting professor at Stanford and Harvard Universities and publicly endorsed Democratic Sen. John Kerry of Massachusetts in Kerry’s losing 2004 presidential campaign.

Shalikashvili, who also served as a director of the Boeing Co., survived a massive stroke in 2004 at his home near Fort Lewis, Washington, next to Tacoma.

I first encountered “General Shali” when I was a brand new second lieutenant in Germany and he was the 3-star deputy commander-in-chief of US Army Europe. He was an impressive man who was universally admired and respected. He would go on to become Supreme Allied Commander and, ultimately, Chairman of the Joint Chiefs.

Retired Army Gen. John Shalikashvili, the first foreign-born chairman of the Joint Chiefs of Staff, who counseled President Bill Clinton on the use of troops in Bosnia and other trouble spots, has died, according to a statement from the White House. He was 75.

Shalikashvili suffered a severe stroke in August 2004 that paralyzed his left side, and he underwent grueling physical therapy.

The native of Poland held the top military job at the Pentagon in the Clinton administration from 1993 to 1997, when the general retired from the Army. He spent his later years living in Fort Lewis, Washington state.

Clinton pointed out that “Gen. Shali” made the recommendations that sent U.S. troops into harm’s way in Haiti, Rwanda, Bosnia, the Persian Gulf and a host of other world hotspots that had proliferated since the end of the Cold War.

In a farewell interview with The Associated Press at the time, Shalikashvili said American military and civilian authorities need to cooperate more when they decide to get involved in such trouble spots, because so much of what the military is asked to do involves humanitarian or peacekeeping operations.

For example, he said, the military might need assistance from the Justice Department to help set up police forces, or advice from the State Department on economic aid.

“We know the agencies, but who is responsible for coordinating it, bringing it all in at the right time?” he said. “Haiti, Bosnia, Rwanda, even Somalia, showed us these things go forward from the first day, and there is no coordinator.”

Shalikashvili was head of the Joint Chiefs when the “Don’t ask, don’t tell” policy on gays in the military was adopted. He had argued that allowing homosexuals to serve openly would hurt troop morale and undermine the cohesion of combat units. Years later, though, he said that he had changed his mind on the issue after meeting with gay servicemen.

“These conversations showed me just how much the military has changed, and that gays and lesbians can be accepted by their peers,” Shalikashvili wrote in a January 2007 New York Times opinion piece.

Earlier in his career, under the first President George H. W. Bush, Shalikashvili served as NATO’s supreme allied commander and also commander in chief of all U.S. armed forces in Europe. At the end of the first Gulf War, he was in charge of the Kurdish relief operation in northern Iraq.

In recent years Shalikashvili served on a senior military advisory group to the campaign of Democratic presidential candidate John Kerry, as did another former NATO commander, Gen. Wesley Clark.

Not long before his stroke, Shalikashvili spoke at the 2004 Democratic National Convention in Boston, saying, “I do not stand here as a political figure. Rather, I am here as an old soldier and a new Democrat.”

Shalikashvili was born June 27, 1936, in Warsaw, the grandson of a czarist general and the son of an army officer from Soviet Georgia. He lived through the German occupation of Poland during World War II and immigrated with his family in 1952, settling in Peoria, Illinois.

He learned English from watching John Wayne movies, according to his official Pentagon biography, and he retained a distinctive Eastern European accent.

Shalikashvili, who studied engineering at Bradley University in Peoria, enrolled in the Air Force Reserve Officers Training Corps, but his eyes were not good enough to be a pilot, according to a Defense Department biography.

He became a U.S. citizen in 1958 and was drafted months later. In addition to being the first foreign-born Joint Chiefs chairman, he was the first draftee to rise to the top military job at the Pentagon, the Defense Department said.

“He knows how to put combat power together, understands policy options and will also be highly regarded by the troops,” retired Col. Roy Alcala, who worked with Shalikashvili in the Pentagon, said in 1993.

Shalikashvili and his wife, Joan, moved to Steilacoom, near the Army’s Fort Lewis south of Tacoma, Washington state, in 1998.

Admiral Mike Mullen, chairman of the Joint Chiefs of Staff:

The Joint Chiefs and the more than two million men and women in uniform join me today in mourning the death of retired General John Shalikashvili, our 13th Chairman of the Joint Chiefs of Staff. We extend to his wife, Joan, son Brant, and his entire family our deepest sympathies in their time of grief and sorrow.

From the humble beginnings of a childhood in war-torn Poland, General Shalikashvili commenced a remarkable rise from the rank of private in the U.S. Army to serving as the principal military advisor to the President and the senior military officer in the United States Armed Forces from 1993-1997.

During his tenure as Chairman, he skillfully shepherded our military through the early years of the post-Cold War era, helping to redefine both U.S. and NATO relationships with former members of the Warsaw Pact, while crafting a vision for our military that vastly improved its joint capabilities and interoperability, efforts that continue to make a difference around the world today.

A consummate leader, soldier and statesman who served his country nobly for 39 years, he commanded at every level from platoon to division, and further distinguished himself leading the highly successful Operation Provide Comfort, a humanitarian and peacekeeping Operation in Northern Iraq following Desert Storm.

As we mourn his passing, so, too, do we reflect on his contributions to our nation — the lives he changed, the careers he mentored, the impact he made simply by virtue of his character and commitment.
We are a stronger, more capable military today because of his efforts to make us so.  He will be deeply missed.

Very sorry to hear Gen #Shalishkasvilipassed away. He did more for #NATOenlargement and #Bosnia as JCS chair than anyone else.