George Clooney is getting resistance to his plan to start an upscale casino in Las Vegas that would require patrons to dress in suits and other formal attire.

Actor George Clooney has proposed the kind of casino that could be as welcome in Las Vegas as the casino thief he portrayed in the heist movie “Ocean’s Eleven.” Clooney, who is investing millions of his own money in a $3 billion hotel and condo complex called Las Ramblas, has floated the idea of having a dress code in the casino similar to those enforced in many European casinos.

Even the most luxurious of properties in Las Vegas allow visitors to walk about freely in shorts and T-shirts — a freedom ensured by the fact that casinos generate profits based on volume rather than exclusivity. Formal dress codes were common in the early days of Las Vegas, where women often wore furs and men dressed in suits to go out. Those days are largely gone as Las Vegas tourists have increasingly dressed down in recent decades, mirroring society at large.

That the Las Ramblas developers are considering a European model — a relatively small casino that encourages upscale dress — has some observers scratching their heads.

“It doesn’t make that much sense to me,” said Jeff Voyles, a casino management instructor at the William F. Harrah College of Hotel Administration at UNLV. “I think they have hotel, condo and real estate guys giving them advice rather than gaming guys.”

“You can’t achieve the revenue you need (to make a casino profitable) by narrowing your focus,” said Voyles, a casino executive at MGM Mirage. “Do you know how many millionaires are walking around Las Vegas wearing jeans and polo shirts? You cannot tell somebody who is 35 to 45 years old, very successful and makes a quarter of a million dollars per year that he has to wear a jacket.”

That’s probably true as far as it goes. Still, there may be a clientele that prefers a more upscale atmosphere. If Clooney’s casino can attract all their business, they might be able to make a go of it.

Regardless of the economics, though, I rather like the idea. Sometimes I get tired of being surrounded by sloppy people who appear dressed for sitting around on their living room couch. There’s something to be said for civility. 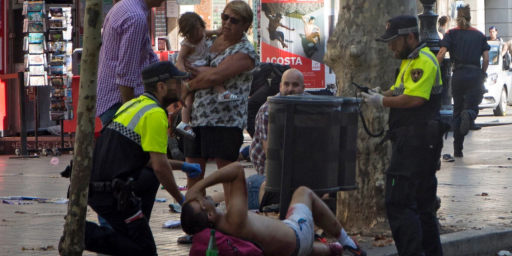 Clooney: I Did Not Blog That