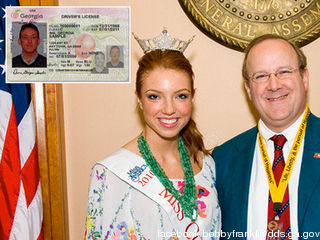 Tired of the oppression of having to have a license to operate a motor vehicle? Your champion is here:

Republican Georgia state legislator Bobby Franklin thinks that driver’s licenses impose undue restrictions on the right of citizens to travel. So he’s proposed legislation to stop the state from issuing them.

“Free people have a common law and constitutional right to travel on the roads and highways that are provided by their government for that purpose,” Franklin’s legislation states. “Licensing of drivers cannot be required of free people, because taking on the restrictions of a license requires the surrender of an inalienable right.”

In an interview with CBS Atlanta News, Franklin claimed driver’s licenses are a throw back to oppressive times.  “Agents of the state demanding your papers,” he said. “We’re getting that way here.” He said there wasn’t a reason for people to need to know who was whom on the roads, and that there’s nothing in place to stop children from driving anyways.

While Franklin is probably right that the licensing requirement doesn’t do much to keep unsafe drivers off the road, the rationale is hardly unreasonable. In olden times, persons traveling from place to place typically had two options:  Walk or ride an animal.  The likelihood of doing severe harm to others by either mode of transport was low.  Once we developed the technology to travel upwards of 100 miles per hour whilst encased in a couple tons of metal, however, the equation changed.  So, no, I don’t need to know “whom” is on the road with me. But I’d like to have some confidence that they know the basic rules and can read the signs.