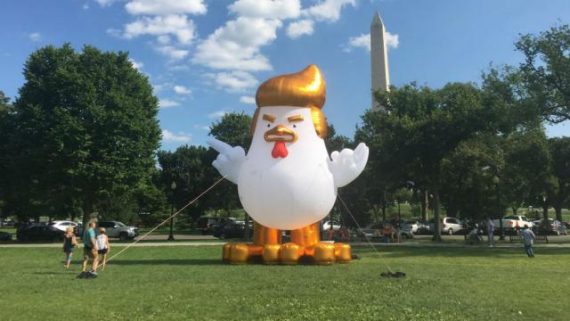 Well, this is odd:

A large inflatable chicken meant to resemble President Trump was placed near the White House on Wednesday.

The inflatable chicken, which features a golden coif of hair and hand gestures similar to Trump’s, is modeled after a statue unveiled in December as the mascot for a Chinese mall. Since the statue’s unveiling last year, smaller copies have appeared across the United States.

The inflatable chicken that appeared Wednesday appears to have been put up near the Ellipse area by the White House that is open to the public.

Here’s a better idea of where it is compared to the White House:

It appears some protesters have inflated this behind the White House. pic.twitter.com/TduZC591BK

Trump, of course, is not in the White House today. Instead, he’s on a “working vacation” at his golf course in New Jersey: