Fox News' Carl Cameron is reporting on a secret plot by the two most embarrassing candidates from the 2012 Republican field to team up in order to win an incredibly unlikely brokered convention. 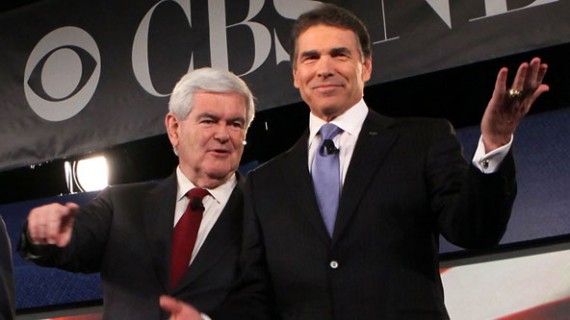 Fox News‘ Carl Cameron is reporting on a secret plot by the two most embarrassing candidates from the 2012 Republican field to team up in order to win an incredibly unlikely brokered convention.

Sources close to the Gingrich campaign say preliminary “what-if” conversations are underway that could lead to a Gingrich-Perry ticket being announced prior to the Republican National Convention at the end of August.

Gingrich insiders hope forming a predetermined ticket with Perry will unite the evangelical, Tea Party and very conservative voters that make up the core of the GOP.

As discussions got underway, a spokesman for Texas Gov. Rick Perry released a statement saying, “Gov. Perry thinks Newt Gingrich is the strongest conservative to debate and defeat President Obama and truly overhaul Washington. The speculation is humbling but premature.”

Floating Perry as a runningmate two days before Alabama and Mississippi could energize conservatives or turn them off.

A senior aide to Rick Santorum called it a desperate hail mary to create buzz ahead of contests in Alabama and Mississippi Tuesday.

After learning of the Gingrich-Perry ticket discussions, the Romney camp said it preferred to focus on the Mississippi and Alabama delegate race, noting that they expect to win about a third of the delegates in a three-way split with Santorum and Gingrich.

Now, as CBS reports (“Gingrich, Perry deny they seek a joint ticket“), both candidates are denying the report.

Newt Gingrich’s spokesman on Sunday dismissed speculation about a potential Gingrich-Rick Perry ticket being announced before the Republican National Convention in August, saying the two camps have not discussed the idea “at any level.”

A report by Fox News cited “sources close to the Gingrich campaign” saying preliminary conversations about such a ticket have begun with the hopes that pairing the former Speaker of the House and the Texas governor might unite evangelical, tea party and other conservative voters.

But Gingrich spokesman R.C. Hammond said no one in the campaign has reached out to Perry’s camp about a shared ticket.

“While there’s certainly a lot of people who are great admirers of Rick Perry on our campaign. whether or not the campaign has gone as far as to reach out to Governor Perry about a possible VP ticket, any sort of talks along those lines would be premature — it would be something more appropriate for later on in the process,” Hammond told CBS News.

Regardless of whether the plan is something serious or a mere trial balloon someone in one camp or another is floating, it’s simply preposterous. Gingrich is easily the most reviled man in the field and Perry left the race as a national laughingstock, having many of us questioning whether he could defeat a bag of hammers in a battle of wits. At this point, I’d think a Herman Cain-Michele Bachmann ticket would be more attractive.