Responding to sluggish sales, General Motors is contemplating killing off one of its vehicle lines, likely Pontiac or Buick.

GM Says It May Kill Off One of Its Brands (Reuters)

General Motors Corp., which issued a shock profit warning last week and has been losing market share, may phase out one of its weaker car brands if sales fail to meet projections, company Vice Chairman Bob Lutz said on Wednesday. GM’s Buick and Pontiac are both “damaged brands” due to lack of investment over the years, and GM is working to correct that with an array of new vehicles coming to market, Lutz told a Morgan Stanley automotive conference in New York. But if some of its brands fail to meet sales projections, “then we would have to take a look at a phase-out. I hope we don’t have to do that. What we’ve got to do is keep the brands we’ve got.”

Financial analysts have said for years that the world’s largest automaker has too many brands to support, even with the gradual phase-out of the Oldsmobile brand a few years ago, particularly with its weaker U.S. sales.

Sales for both Pontiac and Buick have lagged in recent years. But GM is in the midst of a $3 billion investment in new vehicles for Buick, and Pontiac showrooms and they will have four new vehicles this year, including the Solstice roadster, Torrent SUV and the G6 mid-size coupe.

GM currently has more brands than I can remember: Chevrolet, Pontiac, Buick, Cadillac, GMC, Oldsmobile, Saturn, Hummer, and Saab for the North American market plus Holden, Opel, and Vauxhall for overseas.

Chevrolet is a classic American middle class vehicle. Cadillac was the classic American luxury car. Buick and Oldsmobile are redundant semi-luxury lines aimed at those who want a Caddy but can’t afford one. Pontiac was traditionally a sporty line aimed at younger customers but is now undifferentiated. Saturn is a nerdmobile aimed at people afraid of car salesmen. GMC is a Chevy truck with a different grille. Hummer is, well, Hummer. Saab really isn’t a “GM” at all, just owned by them.

Among the traditional GM lines, I’d argue that they should keep Chevy, Cadillac, Saturn, Hummer, and Saab as is. Pontiac should be the brand of all GM’s sporty cars–and only its sporty cars–minus the Corvette, which is too identified with Chevy to rebrand. GMC should either be killed off or all GM trucks should carry the GMC label. 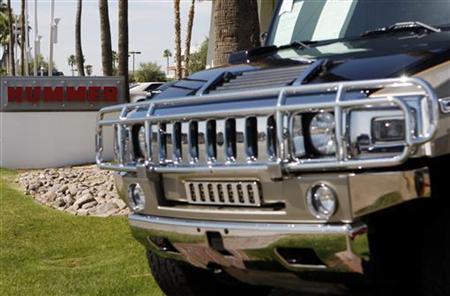