A Google Executive jumps from the edge of space, breaking a record. 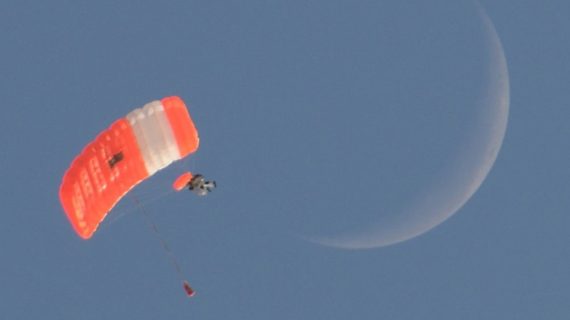 Two years ago German professional daredevil Felix Baumgartner thrilled the world with a skydiving jump from the incredible, almost inconceivable, height of 128,100 feet, just outside what could be called the measurable atmosphere of the Earth. The jump was so high that, due to lack of oxygen and air pressure, Baumgartner had to wear a specialized pressure suit not unlike what the astronauts on the International Space Station wear when they do an exterior space walk. Baumgarnter broke a record that had been held for some 52 years by Air Force test pilot Joseph Kittinger, but earlier this week his record was broken by a Google Executive who wasn’t necessarily planning to break the record at all:

ROSWELL, N.M. — A well-known computer scientist parachuted from a balloon near the top of the stratosphere on Friday, falling faster than the speed of sound and breaking the world altitude record set just two years ago.

The jump was made by Alan Eustace, 57, a senior vice president of Google. At dawn he was lifted from an abandoned runway at the airport here by a balloon filled with 35,000 cubic feet of helium.

For a little over two hours, the balloon ascended at speeds up to 1,600 feet per minute to an altitude of more than 25 miles. Mr. Eustace dangled underneath in a specially designed spacesuit with an elaborate life-support system. He returned to earth just 15 minutes after starting his fall.

Mr. Eustace cut himself loose from the balloon with the aid of a small explosive device and plummeted toward the earth at speeds that peaked at 822 miles per hour, setting off a small sonic boom heard by people on the ground.

“It was a wild, wild ride,” he said. “I hugged on to the equipment module and tucked my legs and I held my heading.”

He did not feel or hear the boom as he passed the speed of sound, he said. He performed two slow backflips before a small parachute righted him.

His technical team had designed a carbon-fiber attachment that kept him from becoming entangled in the main parachute before it opened. About four-and-a-half minutes into his flight, he opened the main parachute and glided to a landing 70 miles from the launch site.

“To break an aviation record is incredibly significant,” said Mark Kelly, the former astronaut, who viewed Mr. Eustace’s ascent. “There is an incredible amount of risk. To do it safely is a testament to the people involved.”

Mr. Eustace’s maximum altitude was initially reported as 135,908 feet. Based on information from two data loggers, the final number being submitted to the World Air Sports Federation is 135,890 feet.

The previous altitude record was set by the Austrian daredevil Felix Baumgartner, who jumped from 128,100 feet on Oct. 14, 2012.

Mr. Eustace was carried aloft without the aid of the sophisticated capsule used by Mr. Baumgartner or millions of dollars in sponsorship money. Instead, Mr. Eustace planned his jump in secrecy, working for almost three years with a small group of technologists skilled in spacesuit design, life-support systems, and parachute and balloon technology.

He carried modest GoPro cameras aloft, connected to his ground-control center by an off-the-shelf radio.

Although Mr. Baumgartner was widely known for death-defying feats, Mr. Eustace describes himself as an engineer first with a deep commitment to teamwork. He pilots his own Cessna twin-engine jet and has a reputation in Silicon Valley for thrill-seeking.

“Alan is a risk-taker with a passion for details,” said Brian Reid, a computer network specialist who has worked with Mr. Eustace.

James Hayhurst, director of competition at the United States Parachute Association, who verified the record, described the venture as “legitimate science.”

“I think they’re putting a little lookout tower at the edge of space that the common man can share,” he said.

Mr. Eustace said he gained a love of space and spaceflight while growing up in Orlando, Fla., during the 1960s and 1970s. His family crowded into a station wagon to watch every launch from Cape Canaveral (known as Cape Kennedy during some of that time). A veteran aircraft pilot and parachutist, he worked as a computer hardware designer at Digital Equipment Corporation for 15 years before moving to Google in 2002.

Mr. Eustace said that his technical team designed and redesigned many of the components of his parachute and life-support system during the three-year development phase. Many of the redesigns were the result of technical surprises.

For example, he discovered that in order to control his suit, he was required to make movements that were exactly the opposite of the control motions made by a conventional parachutist. Left movements must be made for rightward motion, for instance, and upward movements for downward motion.

Two years ago this month, Felix Baumgartner broke a record with his near-space skydive in which he broke the sound barrier.

Alan Eustace, a Vice-President of Knowledge at Google , just broke it.

The funny thing is, though, is that in a project nearly three years in the making, it wasn’t until the last minute that anyone knew he was going to.

“As we were watching him go up today, somebody asked us what the record was,”Paragon Space Development CEO Grant Anderson told me. “We had to look it up! It was cool to break the record, but frankly it was not in the forefront of our minds at all.”

Eustace ascended into the stratosphere at a rate of about a thousand feet per minute. Which means it took over two hours for him to reach his final altitude of just over 135,000 feet. Once he reached the final altitude, he actually just spent about 30 minutes floating above the Earth enjoying the view.

“I can see the curvature of the Earth and the darkness of space and it’s really awesome!” Eustace proclaimed from 135,908 feet.

After enjoying the view, Eustace detached himself and went into free-fall. In less than two minutes, he was experiencing weightlessness and falling so fast that he broke the sound barrier. He stabilized the free fall using a small drogue chute.

At 18,000 feet, he deployed his full parachute, and spent the next fifteen minutes falling to Earth. Shortly after landing, a recovery team helped him remove the bulky space suit and he traveled back to the launch site.

This isn’t the end of the story, though, as neither Paragon nor Eustace were interested in pursuing this space jump for the sake of a space jump. The technology developed for this project will be used for other projects, as well.

Because the people involved in the projected had not gone into the jump with the idea of breaking the record, Eustace’s jump didn’t receive the same kind of pre-jump publicity or coverage that Baumgartner’s did. That jump, you may recall, was co-sponsored by Red Bull and was the subject of a live broadcast on the Discovery Channel that followed Baumgartner from the moment he lifted off, all the way through his ascent throw the atmosphere, and then the amazing jump itself. Because of this there were all kind of camera’s covering the event, including specially designed cameras on Baumgartner himself and on the capsule that he used during his ascent that allowed viewers to follow the entire process, including those tense few moments as Baumgartner stepped out of the capsule and then dropped to the Earth. Eustace, by contrast, appears to have ascended with little more coverage than a few GoPro cameras and, apparently, a chase plane of some kind that kept an eye on the ascent. Additionally, unlike Baumgartner, Eustace did not ascend inside of a capsule. Instead, he as attached to the balloon and other equipment and wearing his pressurized suit all the way up. When it came time to begin the jump, Eustace basically had to cut the cord himself and let gravity do its work. Before that happened, though, Eustace spent about a half hour attached to the balloon floating at an altitude that no human being had been outside of an aircraft of spacecraft, and watched the Earth below him. It must have been an amazing sight, and I hope Eustace got some good video and photos that he’ll be sharing with us in the future.

As with the Baumgartner jump, there’s really not much that can be said about this other than the fact that it is just exceedingly awesome, and another demonstration of just how much we’re now able to defy the limits of Earth and the limits of a thin upper atmosphere. More so than the jump two years ago, though, which was as much a daredevil’s tempting of fate as it was a research project, Eustace’s jump was primarily designed to test new technology that could be used in other ventures ranging from tourist ventures into ultra-high altitudes to new platforms for scientific research of the upper atmosphere and the area where the Earth ends and space begins. And, as Alex notes, the technology could also be adaptable to human exploration of deep sea depths that remain largely inaccessible and mysterious.

Congratulations to everyone involved, but most especially to Alan Eustace, who officially earns the title Badass in my book.

As I said, there’s limited video of this jump, but here’s one brief video from The New York Times:

And another from Vimeo: