GOP May Seek a Deal on Accounts

GOP May Seek a Deal on Accounts (WaPo)

President Bush is still in the opening phase of a campaign to sell the public and Congress on his ambitious plans for Social Security, but some Republicans on Capitol Hill have decided it is not too early to begin pondering an exit strategy. With polls showing widespread skepticism of Bush’s proposed individual investment accounts and Democratic lawmakers expressing nearly uniform opposition, some allies of the president are focused on possible split-the-difference deals.

As described in interviews, most of these compromises would involve Bush significantly scaling back his proposals for restructuring the popular benefits program. In exchange, he could still claim an incremental victory on what he has described as his core principles: enhancing the long-term solvency of Social Security and giving younger Americans options to invest more of their retirement money.

In one example, Rep. E. Clay Shaw Jr. (R-Fla.) said, a compromise might involve merging Bush’s proposal with plans — some backed by Democrats — that create government-subsidized savings plans outside Social Security. Under this scenario, Bush’s proposal to divert 4 percent of an individual’s Social Security payroll tax would become 2 percent or less.

Compromise in a system designed with extensive checks and balances? Shocking.

If the president can get this deal, he should certainly take it. Once the camel’s nose is under the tent, and the public’s fears of partial privitization are allayed, the margins can be increased. And a mandatory savings plan makes some sense, depending on how it’s structured. 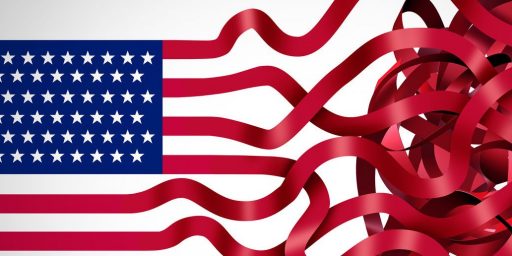 Trump to Propose Merger of Education, Labor and Consolidation of Welfare Programs [UPDATED]