Government Fighting Back Against S&P?

Is S&P's downgrade of the US bond rating "free speech" and thereby protected by the Constitution? 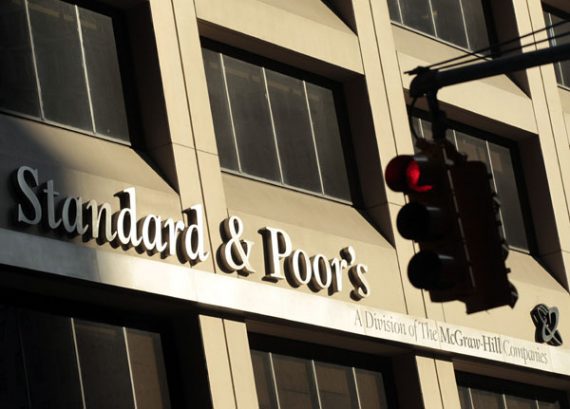 WSJ reports that there may be a backlash in Washington against S&P:

Standard & Poor’s downgrade of the U.S. government’s credit rating has created something few thought possible: a bipartisan consensus in Washington.

Unfortunately for S&P, the rating firm is the one in the crosshairs. Democrats and Republicans in Congress are gearing up to put it under investigative scrutiny and do more to restrict the influence of S&P and its peers in financial markets.

Democrats are particularly angry about S&P’s alleged $2 trillion mistake in estimating total federal deficits over the next decade. The firm changed the forecast at the Treasury Department’s urging, but went ahead with the downgrade anyway, saying the change didn’t greatly affect its analysis.

The Senate Banking Committee staff is gathering information, and “all options remain on the table,” including whether to hold a hearing, according to a committee aide.

U.S. banking regulators have struggled to find an alternative gauge for the creditworthiness of bank assets, particularly in rules governing how much capital institutions need to hold as protection against losses. In almost a year of work, the Federal Reserve, the Federal Deposit Insurance Corp. and the Comptroller of the Currency haven’t yet found a solution to propose.

Bank trade groups have been pushing Congress to soften the provision, arguing that any alternative system would be expensive to develop and potentially less effective. John Walsh, acting head of the OCC, has asked several times for Congress to allow regulators the flexibility to keep ratings in the mix of risk measures. But now, “the idea of repealing that provision is off the table,” said Jaret Seiberg, a Washington analyst with investment bank MF Global. “It’s hard to see any reason why Senate Democrats are going to allow that to proceed.”

Rep. Barney Frank of Massachusetts, the top Democrat on the House Financial Services Committee and co-author of the Dodd-Frank bill, said the downgrade shows he was right to restrict the role played by the raters. “They did a terrible job” in the run-up to the financial crisis, assigning triple-A ratings to many mortgage-related securities that quickly plunged in value, Mr. Frank said.

Tyler Cowen is pensive: “If all they do is take away the protected political status of those agencies, I am fine with the outcome but still I do not like the process.  That the agencies were a) often mistaken in the past, and b) lobbied the government for privileges in the past, does not appease me.  Exercising free speech rights should not lead to regulatory retaliation from Congress, even if some of the changes are good ones.”

But S&P isn’t simply exercising free speech rights. Their ratings have previously had quasi-legal status and have real impact on the operation of the United States Government and the national economy. Taking action to limit that power in the wake of questionable exercise is perfectly reasonable, if not prudent. And it’s particularly defensible in light of Dodd-Frank having preceded the unwelcome “speech” by a year and having been in the works much longer.

This isn’t the same thing as Italy initiating criminal investigations against the ratings agencies as a means of intimidation. There’s nothing remotely punitive about this action–especially since it would impact Moody’s and Fitch, which have kept the US at AAA status equally.