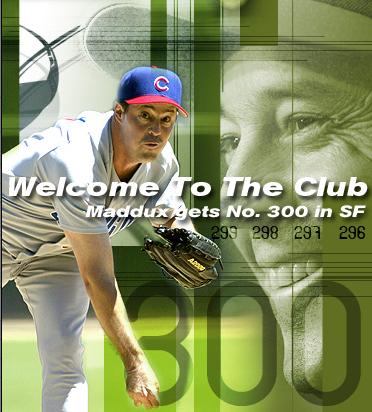 Greg Maddux relied on guts, guile and his bullpen to win his 300th game because he never quite found the control that has so defined his stellar career. Maddux calmly overcame a shaky start to become the 22nd major league pitcher to reach 300 victories, leading the Chicago Cubs over the San Francisco Giants 8-4 on Saturday. Maddux needed support from his bullpen to ring in No. 300. “Obviously, to win 300 games, you’ve got to have a lot of help. I’ve played on a lot of good teams, and a lot of times, you’re only as good as the guys behind you. Today was a good example,” Maddux said.

He is the first National Leaguer to accomplish the feat since Philadelphia’s Steve Carlton in 1983. Roger Clemens was the last to do it on his fourth attempt for the New York Yankees on June 13 last season. Maddux needed just two tries — he got a no-decision in his first chance last Sunday against the Phillies. “It’s pretty special,” he said. “I like to look ahead. I’ve never really looked back. When I’m done playing I’ll look back. I’m sure I’ll pat myself on the back then.”

After the final out, Cubs fans held up a large “W” banner, and a graphic recognizing Maddux’s achievement was shown on the center-field scoreboard. But Maddux never came back onto the field. He didn’t feel it would be right to hold a huge celebration in somebody else’s ballpark — a sign of the humility that his teammates and coaches have come to expect. “It was fitting. Greg meant what he says. He’s a sincere man,” Baker said. “He pitched well enough to win. You don’t win 300 games with your best stuff all the time.” The 38-year-old right-hander certainly wanted to get this major milestone over with, and so did the rest of the Cubs — who knew their star pitcher cared more about bringing the focus back to the their playoff chase. Chicago’s potent lineup rallied from a three-run deficit to help Maddux (11-7) win his fourth straight decision and improve his career record to 300-170. “It’s more of a sense of relief more than anything,” Maddux said. “Hopefully, we can move on. I don’t think anybody got too caught up in it to begin with. We can put it behind us and do what we can to get to postseason.”

ESPN’s Jason Stark explains how, even with four Cy Young Awards to his credit, Maddux is still underappreciated.

As spectacular a feat as 300 wins may be, the brilliance of Maddux can’t be defined by his victory totals. It’s more accurately defined by how much better he’s pitched all these years than all those pitchers around him have pitched.

Coming into this season, according to Lee Sinins’ Sabermetric Baseball Encyclopedia, the average National League pitcher during Maddux’s career (1986-present) had an ERA of 4.24. Maddux’s career ERA, on the other hand, looked a little different than that: At a fabulous 2.89. You might not be surprised to learn that’s the greatest difference in ERA by any 300-game winner in history, compared to his league ERA.

Maddux also has the biggest difference, compared to his league, in baserunners per nine innings (2.39 better than his league) and walks per nine innings (1.51 better). And he’s second only to Christy Mathewson in strikeout-walk ratio (1.49 better). So this just in: This guy can really pitch.

On the other hand, Maddux’s 105 complete games will be the fewest of any 300-game winner. But obviously, that’s a reflection of the age he pitched in.

Another byproduct of the five-man-rotation age Maddux pitched in is that only one 300-game winner in history (Don Sutton) had fewer 20-win seasons. Maddux won 20 twice — tied with Nolan Ryan for the second-fewest ever, behind Sutton’s one. Cy Young (now there’s a shocker) had the most 20-win seasons (15). But when you start lowering the bar to more accurately reflect the benchmarks of Maddux’s age, he rises right to the top of the 300-win lists. Most 15-win seasons:

More stats and charts at the link.

David Pinto: “Congratulations to Greg Maddux on his 300th victory! It wasn’t the best game he ever pitched, but his offense came through with plenty of support as Maddux just had to go five to pick up the win. The Cubs will at least maintain their wild card lead today.”

Mac Thomason: “Congratulations to Greg Maddux on his 300th victory. I only wish it had been in a Braves uniform.” I second that.

The Braves were playing in Arizona on Saturday while Greg Maddux was pitching in San Francisco, but they kept close tabs on his pursuit of his 300th victory. When Maddux got it, they reacted as if he were still a Brave and not a Chicago Cub. “He was as much a part of our success when he was here as anybody,” said third baseman Chipper Jones, who reached the major leagues with Atlanta in September 1993, the first of Maddux’s 11 seasons with the Braves. “We all feel like we had a little part in [his success], but I don’t think there’s any doubt who the main contributor was. It’s him,” Jones said. “He’s the best pitcher I ever played behind.”

Since left-hander Mike Hampton wasn’t pitching or charting pitches in the Braves’ game Saturday, he made it his duty to keep track of Maddux on the clubhouse television. He made countless trips from the clubhouse to the dugout. “Hampton was good about telling me what was going on, because I didn’t want it to look like I was watching that game and not ours,” said Braves backup catcher Eddie Perez, one of Maddux’s personal catchers during his years with the Braves. He said Maddux was as good a teammate as he ever had. “I’m happy for him,” Perez said. “Everybody here is, including Bobby [Cox] and the coaches.”

Cox wasn’t surprised by the satisfaction Braves players expressed over Maddux’s win. “You should have seen the way they were trying to get the 15th win for him last year,” Cox said, referring to the pitcher’s record streak of 16 seasons with at least 15 victories. “Everybody wanted it so bad for him, because he’s such a good guy.” “Anytime you’re around somebody who’s got that kind of greatness about them, it’s always a thrill,” Braves broadcaster Pete Van Wieren said. “You wish you were there to see it. The 11 years [Maddux] spent here were certainly a big part of the history of the ballclub.”