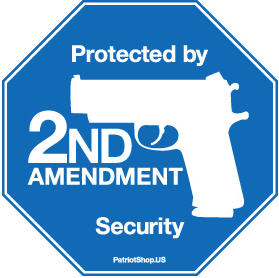 A series of new comment to a post earlier this month raised the question this morning of whether the Second Amendment and its right to keep and bear arms is a protection against tyrannical government forming in the United States.  The argument seemed to be that the mere presence of an armed citizenry would keep the feds from going too far.  One of the comments noted:  “The final resting place of tyranny is in force of arms. THAT is why the second ammendment [sic] exists.”

I accept, certainly, the notion that all of the amendments are designed to limit what the government can do.  As such, they are protections of citizens against the government.  However, this is different, I would argue, than saying that the purpose of the Second Amendment was to create an institutionalized, armed check on tyranny (i.e., Sharron Angle’s “Second Amendment remedies”).   One can go round and round over the purpose of the Second Amendment and the original intent behind it.  For example, while one can focus on the right to keep and bear arms, one, too, can also focus on the phrase “A well regulated militia, being necessary to the security of a free state” and wonder how in the world the purpose of the amendment would be to arm the citizens against the government, per se.

I do find the notion that we need to be armed just in case the government gets uppity to be problematic.   If anything this is because I don’t care how well armed we are as civilians, if the government was actually transformed into a functional authoritarian state bent on tyrannizing us, then the might of the US military would be more than sufficient to put down an insurrection if it was based solely on arms held by private citizens.*

And, really, the basic debate over the Second Amendment is largely moot in a practical sense, given that the Supreme Court recently ruled gun ownership to be an individual right.

So, setting aside the Second Amendment, per se,  the question of whether there is a correlation between gun ownership by private citizens and the likelihood of tyrannical government made me think of some data that I had collected in conjunction with a book project I am working on (a comparison of 30 democracies on a number of institutional variables).  Specifically, I had gathered data on guns per 100 citizens from the Small Arms Survey 2007 (source).  Not surprisingly, the US has the most guns (by a rather large margin) of the 30 cases under scrutiny: 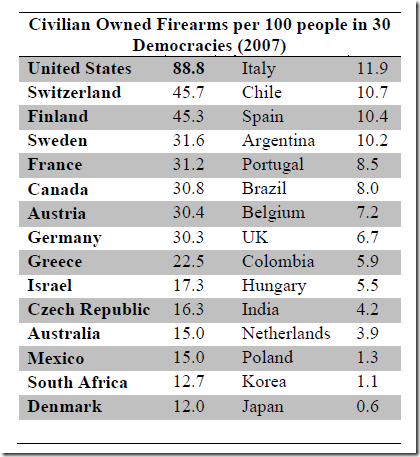 I gave a look at the Freedom House scores for 2007 and really the only significant deviation in terms of levels of freedom is that some of the less developed states on the list (Argentina, Brazil, Colombia, India, and Mexico) score 2 or higher on the composite Freedom House score.  The scale runs from 1-7, with 1 being best and 7 the worst (assuming, of course, a normative preference for freedom).   The likely explanation for the deviation in term of the FH score is more likely a result of levels of development than it is anything to do with gun availability.  Note, for example, that Mexico has a gun ownership rate identical to Australia.

As such, we do not see much in the way of proof, at least in this limited examination, of gun ownership and freedom, per se.  Really, what we can see here is that economic development and well established rule of law and institution are the best long-term guarantors of freedom, not an armed population.

And note:  I am not disputing here anything to do with gun ownership rights.  Rather, I am trying to address what I consider a myth in American politics:  that the reason we are allowed gun ownership rights is to protect us from the government.  Again:  the best protection from government tyranny comes in the form of well developed institutions and rule of law.

To conclude:  does this prove anything?  No, of course not.  Still, it is interesting and at least gives us some actual information to consider as opposed to simply pulling opinions out of the air because we like them.

Really, to me the more interesting question about personal gun ownership is its effects on things like crime rates.  This is especially true given that the likelihood that an individual could conceivably use a personal firearm to protect his or her home is substantially higher (to put it mildly) than they are to use said weapon in an insurrection against a democracy gone bad.

*Really, if we want to prevent the chance of the US government becoming a tyranny, the better move would be to disarm it (i.e., do away with a standing military).  If there was no standing military, the potential for central government tyranny would be greatly diminished.  I am not, btw, recommending this policy actions, but if are going to worry about tyranny (and fears from the Founding Era) this one need attention as well.