There’s a minor hubbub brewing over the fact that Gwen Ifill, who will once again moderate the vice presidential debate, is publishing a pro-Obama book shortly after the election, apparently unbeknownst to the McCain-Palin campaign.

Questions are being raised about the objectivity of Thursday’s vice presidential debate moderator after news surfaced that she is releasing a new book promoting Barack Obama and other black politicians who have benefited from the civil rights struggle.

Gwen Ifill, of PBS’ “The NewsHour,” is expected to remain as moderator, however.

“The book has been a known factor for months, so I’m not sure what the big deal is,” said NewsHour spokeswoman Anne Bell.  She told FOXNews.com that there were no concerns about Ifill’s neutrality, and that the debate Thursday between Sarah Palin and Joe Biden would go forward as planned. Ifill also moderated the 2004 vice presidential debate. “We were pleased that the (debate) commission once again turned to Gwen to moderate the debate,” Bell said. “They’ve known and trusted her as a moderator and that’s wonderful.”

Ifill’s book, “The Breakthrough: Politics and Race in the Age of Obama,” is due to be released about the same time the next president takes the oath of office.  In her book, Ifill contends that the black political structure of the civil rights movement has cleared the way for post-racial politicians to ascend to new heights.

Now some are wondering whether Ifill can be fair and balanced, and whether she should be the moderator of Thursday’s 9 p.m. ET debate.  “Clearly her books aren’t going to do as well unless Obama wins, so it looks like she has some investment, literally, in one candidate or the other. And she’s supposed to be sitting there as a neutral arbiter during the debate,” said NPR’s Juan Williams, a FOX News contributor. “I think the world of Gwen Ifill but I know there’s a perception problem.”

John McCain told FOX News Wednesday he believes Ifill will be “objective” at the debate. “Does this help if she has written a book that’s favorable to Senator Obama? Probably not,” McCain said. “But I have confidence Gwen Ifill will do a professional job.”

Andrew Sullivan thinks even raising the question is slimy, if not racist and misogynistic.

It’s straight out of Rove. Attack the debate moderator. The best that can happen from the Rove-Schmidt point of view is that Ifill softens her questions to Palin out of fear of being smeared by the McCain camp, as they have tried to smear me and any other journalist doing their job. The worst is that Ifill does not get intimidated, asks tough questions, and then gets the post-debate spin by the GOP focused on her, not Palin. It helps too that Ifill is black: it shores up the racist vote McCain needs to win.

Why not ask Couric instead? Or Campbell Brown? It should be a woman. And removing Ifill will only help black turnout. But I really miss Tim Russert right now, don’t you?

But, surely, it’s fair to ask whether Ifil is objective here.   Presumably, Democrats would raise similar questions if a pro-McCain moderator had been chosen.  Goodness, the Democrats canceled primary debates that were hosted by Fox News because they’re viewed as pro-Republican even though there were not going to be any Republicans in the debates!

Of course, anyone who’s ever read any of Jim Lehrer’s novels (I’ve read several; they’re good) knows that he’s sympathetic to the Democrats and has a visceral dislike for certain types of conservatives.  Indeed, any network anchor aside from Fox’s Brit Hume would be presumed to be biased in favor of the Democrat — and he’d be presumed to be based in favor of the Republican.     Perhaps the answer is to get someone other than a network answer to do the job?  Or, perhaps, get someone like C-SPAN’s Brian Lamb who’s scrupulously neutral?

I honestly don’t think it’s that big a deal.   The late Tim Russert was an unabashed Democrat but he generally managed to be pretty tough on anyone in his line of fire.  Lehrer does a decent job at these things, bending over so far to be neutral that he’s sometimes accused of being too soft on the candidates.  Ifill’s not a great moderator, frankly, but, as McCain says, she’s a professional.  To the extent that she’s in the tank for Obama, it would have been the case regardless of the book deal.

Are Republicans who are raising this trying to create a ready-made excuse in advance of the debate?  To make Ifill more self conscious about asking Palin tough questions?  Absolutely!  It’s a time honored game tactic employed by the best coaches.

UPDATE: I’m a fan of Howie Kurtz but can only chuckle his assertion, of a book whose subtitle proclaims this The Age of Obama, that, “There is no evidence that the book will be favorable to the Democratic nominee.”

Craig Henry rounds up other reactions and is less nonchalant than I am.  Indeed, I tend to take the view expressed in his title, albeit as a statement rather than a challenge. 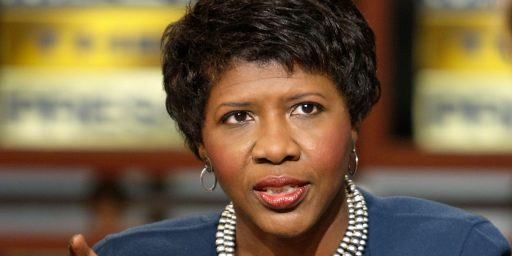