I haven’t written previously about the news of the horrific earthquake that has leveled Haiti’s capital because, really, what is there to say? But a CNN Breaking News alert that, “Hundreds of thousands of people have died in Haiti’s earthquake, the prime minister told CNN today” was staggering enough to prompt a mention.

The reality, it would seem, is that we have no idea how many are dead.

But Haiti’s half of Hispaniola is home to a little more than 10 million people, who are densely packed into the sort of unsafe buildings that you get in the poorest country in the hemisphere. And we know that the damage was severe enough that even the palace has been destroyed.

The number is certainly well into the thousands. Whether it’s many multiples of that or hundreds of multiples, we may never know.

Haitians are piling bodies along the devastated streets of their capital after a powerful earthquake flattened the president’s palace and the main prison, the cathedral, hospitals, schools and thousands of homes. Untold numbers are still trapped.

President Rene Preval says he believes thousands of people are dead even as other officials give much higher estimates — though they were based on the extent of the destruction rather than firm counts of the dead.

His prime minister, Jean-Max Bellerive, tells CNN: “I believe we are well over 100,000,” while leading senator Youri Latortue tells The Associated Press that 500,000 could be dead. Both admit they have no way of knowing.

The tendency during natural disasters — whether the Tsunami in Indonesia or Hurricane Katrina — is vast overestimation of the death toll in the early going. Whether that’s an attempt to quickly get past the sympathy gap and get people to see action as urgent or whether it’s grandstanding — or perhaps some combination — I don’t know. 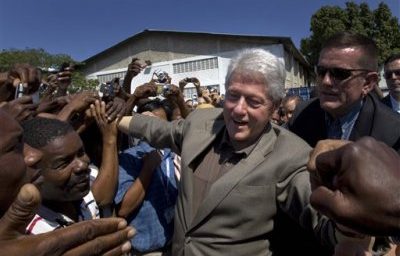