80 years ago, Prohibition ended. However, we are still making the same mistakes that were made from 1920 to 1933. 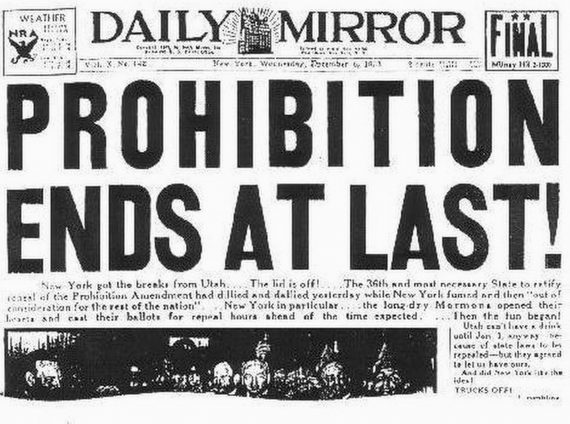 It was eighty years ago today, December 5th, 1933, that the nation’s decade long failed experiment in alcohol prohibition finally came to an end with the ratification of the 21st Amendment:

Cheers! Today is the 80th anniversary of the repeal of Prohibition. The Twenty-First Amendment to the Constitution was ratified on December 5, 1933. It repealed the Eighteenth Amendment establishing Prohibition, which went into effect on January 17, 1920.

It’s the only Amendment that repealed a prior Amendment. It’s also the only amendment to be ratified using the state ratifying convention. All other Amendments have been ratified by state legislatures.

The first state to ratify was Michigan on April 10, 1933. On December 5, 1933, Utah became the 36th state to ratify (Ohio and Pennsylvania had ratified on the same day), which brought the Amendment into effect

Five years ago, on the occasion of the 75th anniversary of the Amendment’s ratification, Cato’s Brandon Arnold noted that today’s anniversary, and indeed the entire failed history of Prohibition, is more than just a moment in history:

Prohibition isn’t a subject that should be studied by historians alone, as this failed experiment continues to have a significant impact on our nation.

Groups like the Women’s Christian Temperance Union, a key force in the passage of Prohibition, survive to this day and continue to insist that Prohibition was a success and advocate for dry laws.

Prohibition-era state laws, many of which are still on the books today, created government-protected monopolies for alcohol distributors. These laws have survived for three-quarters of a century because of powerful, rent-seeking interest groups, despite the fact that they significantly raise costs and limit consumer options. And because of these distribution laws, it is illegal for millions of Americans to have wine shipped directly to their door.

And, of course, Prohibition has been the model for the largely failed War On (Some) Drugs. Many of the ill effects that we saw from the failed experiment of 1920 to 1933 ranging from the creation of a powerful criminal class, to a set of laws that made criminals out of large portions of the American public for little good reason, to the ensuing crime and violence that the criminal gangs that took control of the distribution and sale of the illegal substance in question. If nothing, this demonstrates that we have yet to learn the real lessons of Prohibition and will continue to pay the price for that failure.

So raise a glass tonight to the 80th anniversary of a victory for personal liberty, but sober your celebration with the thought that we continue to repeat the mistakes of those people we now laugh at who thought that they could ever really succeed in stopping the American public from doing something that they want to do.