I’m with Bob Tagorda (see previous post) on this one. I’ve done the countdown to midnight thing for a goodly number of these now. Some have been quite memorable. Others have long since faded. 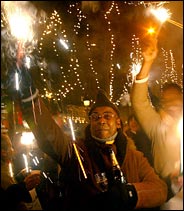 New Year in Paris
People celebrating the New Year at the Champs Elysees in Paris.

I did that for New Year 1990. New Year 1991 was Somewhere in Saudi Arabia. I’ve done New Year abroad ten times, done new decades four times, and even a new millenium. I’ve watched the clock turn midnight while at parties, in a Humvee, and just sitting around at home. I broke up with a girl during a particularly bad New Year’s Eve party and started a pretty good relationship with a New Year’s Eve date the very next year. Now, I’ve even blogged a New Year.