When rumors began to spread last night that Michigan Congressman Mike Rogers, who heads the House Intelligence Committee, would be leaving Congress some wondered whether he had reconsidered his decision not to enter the race for Carl Levin’s Senate seat. As it turns out, he’s leaving to go into the talk radio business:

Rep. Mike Rogers, who announced Friday that he would not seek re-election, will join Cumulus Media as a radio host after the conclusion of his seventh term, he said in an interview with Grand Rapids station WJR.

“We are thrilled to have Chairman Rogers join our team,” Cumulus CEO Lew Dickey said in a statement. ”He has been instrumental helping to shape many of the most important issues and events of our time and will play a significant role in our expanding content platform.”

The Michigan Republican and longtime House Intelligence Committee chairman will join Cumulus in 2015, according to a press release. Cumulus is the second-largest radio operator in the country, with 460 stations in 89 markets.

Rogers, a former FBI Agent, has been in Congress since 2000. Apparently, the money’s better in the private sector. 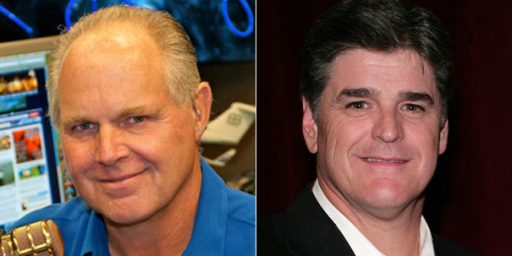 Limbaugh and Hannity Off Cumulus Stations?