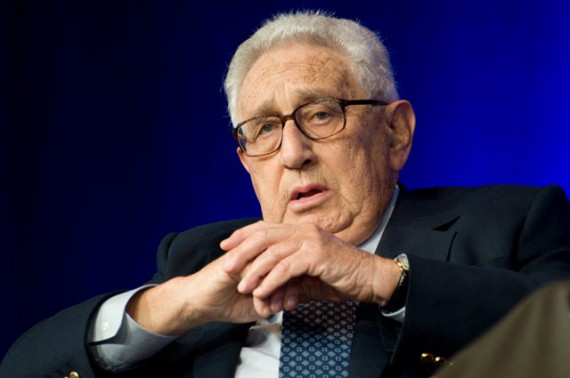 It’s another round of security theater:

Seems no one is immune from the tender mercies of the TSA pat-down. First, we learned that Sen. Dianne Feinstein (D-Calif.), the chair of the Senate Intelligence Committee, was subjected to a handsy search. And now we learn of the latest high-profile search-ee: former Secretary of State Henry Kissinger.

Yeah, the guy who was once an advisor to presidents, the one who helped negotiate the end to the Vietnam War…and, oh yeah, he’s got a Nobel Peace Prize.

But not, apparently, in his pocket.

Kissinger, who will be 89 this month, was spotted on Friday at LaGuardia airport in New York, getting routed to the pat-down line while going through security. Freelance reporter Matthew Cole recognized him — something the TSA agent checking identification did not.

After asking Kissinger his name as he passed through the scanner, the agent sent him to be searched. Kissinger was in a wheelchair, Cole tells us, not because he couldn’t walk, but because, Cole surmised, it was a long walk to the gate. In the search area, Kissinger was subjected to what Cole called “the full Monty” of the usual groping. “He stood with his suit jacket off, and he was wearing suspenders. They gave him the full pat-down. None of the agents seemed to know who he was,” he says.

Because, of course, an 89 year-old German-Jewish former Secretary of State is clearly a threat to airline security.