Herman Cain And Newt Gingrich Bring Out The Anti-Muslim Hysteria 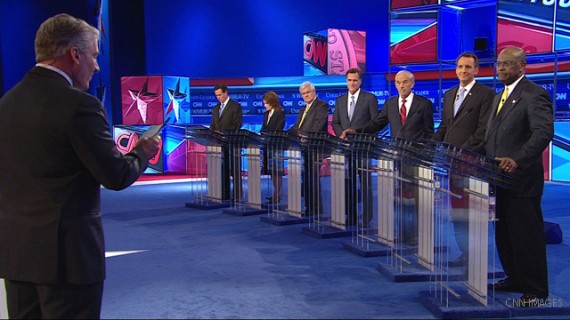 Not surprisingly, Herman Cain’s position on hiring Muslims for government positions and subjecting them to loyalty oaths became the subject of a question last night and, not unexpectedly, Cain doubled down yet again:

KING: While we’re on the topic of faith and religion, the next question goes to Mr. Cain. You recently said you would not appoint a Muslim to your cabinet and you kind of back off that a little bit and said you would first want to know if they’re committed to the Constitution. You expressed concern that, quote, “a lot of Muslims are not totally dedicated to this country.” Are American-Muslims as a group less committed to the Constitution than, say, Christian or Jews?

CAIN: First, the statement was would I be comfortable with a Muslim in my administration, not that I wouldn’t appoint one. That’s the exact transcript. And I would not be comfortable because you have peaceful Muslims and then you have militant Muslims, those that are trying to kill us. And so, when I said I wouldn’t be comfortable, I was thinking about the ones that are trying to kill us, number one. Secondly, yes, I do not believe in Sharia law in American courts. I believe in American laws in American courts, period. There have been instances –

CAIN: There have been instances in New Jersey — there was an instance in Oklahoma where Muslims did try to influence court decisions with Sharia law. I was simply saying very emphatically, American laws in American courts.

KING: So, on that point, Governor Romney let me come to you on this.

What Mr. Cain is saying that he would have — my term, not his — a purity test or a loyalty test. He would want to ask a Muslim a few question or a few questions before he hired them, but he wouldn’t ask those questions of a Christian or Jew.

CAIN: Sorry. No, you are restating something I did not say, OK? If I may, OK?

KING: When I asked — I asked this question the other night, though, you said you want to ask a Muslim those questions but you didn’t you have to ask them to a Christian or a Jew?

CAIN: I would ask certain questions, John. And it’s not a litmus test. It is simply trying to make sure that we have people committed to the Constitution first in order for them to work effectively in the administration.

Not to be outdone, Newt Gingrich decided to use the opportunity to once again compare Muslims to Nazi:

GINGRICH: I just want to comment for a second. The Pakistani who emigrated to the U.S. became a citizen, built a car bomb which luckily failed to go off in Times Square was asked by the federal judge, how could he have done that when he signed — when he swore an oath to the United States. And he looked at the judge and said, “You’re my enemy. I lied.” Now, I just want to go out on a limb here. I’m in favor of saying to people, if you’re not prepared to be loyal to the United States, you will not serve in my administration, period.

This isn’t really a surprising statement from Gingrich. Back during the debate over the so-called “Ground Zero Mosque” Gingrich compared the project to building a Nazi monument outside the Holocaust  Museum. Nonetheless, it has already drawn criticism from some Muslim-American groups:

Presidential candidate Newt Gingrich’s comments comparing Muslims to Nazis at the GOP debate Monday night have sparked a firestorm in the blogosphere, where liberals, and even some conservatives, have pounced on the former House speaker for what they view as excessive fear mongering.

“He is appealing to the basest instincts of a very small minority of folks,” said Matthew Dowd, ABC News consultant who served as chief strategist on George W. Bush’s 2004 re-election team. “Either he is doing this for political purposes to distract people from a campaign in disarray, which is bad, or he actually believes it, which is scary.”

“It’s really reprehensible when you have a mainstream presidential candidate equate Muslims with Nazis and communists,” said Ibrahim Hooper, communications director at Council on American-Islamic Relations. “It is what we’ve come to expect from the right wing of the political faction.”

CAIR also assailed GOP candidates Herman Cain and Rick Santorum for their comments on the question of sharia law taking over the U.S. court system.

The sad truth is that Cain and Gingrich were getting applause for what they were saying. There is no downside inside the Republican Party for religious intolerance as long as it’s directed toward Muslims, and there’s no downside to hysteria when it’s directed at that mysterious and secret “other” that is supposedly plotting at this very moment to kills us all via sleeper cells. (Which leads to the thought that if the Muslim sleepers are as adept as Gingrich and Cain think, then we’re pretty much doomed)

Only one other candidate was asked about this issue last night, Mitt Romney. And he was, relatively speaking, the voice of sanity on this issue:

ROMNEY: Well, first of all, of course, we’re not going to have Sharia law applied in U.S. courts. That’s never going to happen. We have a Constitution and we follow the law. No, I think we recognize that the people of all faiths are welcome in this country. Our nation was founded on a principal of religious tolerance. That’s in fact why some of the early patriots came to this country and we treat people with respect regardless of their religious persuasion.

Obviously, anybody who would come into my administration would be someone who I knew, who I was comfortable with, and who I believed would honor as their highest oath — their oath to defend and protect the Constitution of the United States.

Of course, Romney is a “RINO” so the fact that he doesn’t buy into the anti-Muslim hysteria pedaled by people like Cain and Gingrich is probably considered a mark against him. Which is pretty sad.