The Blair government is being criticized by gay rights advocates as “heterophobic” for its proposed “Civil Union” legislation. Apparently, for some, compromise is not acceptable–it’s the whole ball of wax or it’s nothing at all.

Bill Kristol recently suggested that within a few years, in America, it’s quite possible that the legal idea of “marriage” will become nothing but a contractual one, with only the private sphere (church and family) defining anything else about it. Would that be a bad thing? I think not, and I imagine it’s where the Brits are probably headed too.

Because I tend to view these issues through a libertarian-utilitarian-secular lens, I would agree. But I don’t begrudge Kristol and others who view the world from a deeply religious perspective their vision, either. Indeed, one of the things secular humanists forget is that others have every bit as much a right to organize and fight for their position as we do. While we live in a secular state and no one has the right to impose their religion on us, it is perfectly legitimate for people to act on their religiously-inspired sense of morality in advocating public policies. Just as the majority ruled in Romer v. Evans that homosexuals have a fundemental right to organize to fight for preferential treatment, so do fundamentalist Christians or devout Jews. Being in the majority doesn’t preclude one’s right to try to impose their will on others, so long as the boundaries of the Constitution are observed. 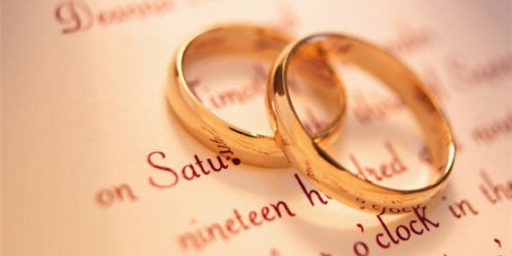 Getting The State Out of the Wedding Business