87.18% of the caucus is elected from safe to very safe districts and, therefore, the only real fear that they might have for their jobs would be at the primary stage.

As part of some research for an article I am working on, I was curious as to whether there was a difference between the Republicans who voted in favor of HR 2775 (the CR that allowed the government to re-open and to punt for a couple of months on the debt ceiling).  I was interested in the degree to which the Tea Party faction as a coherent group and/or primary threats are influencing legislative behavior.  Not only was it clear that Speaker Boehner was not in control of his caucus during the showdown, but the final vote to solve the impasses did not receive a majority of the majority caucus’ votes.  Here are some preliminary observations on this topic.

Now, without a doubt, some number of the 144 Republicans voted against the bill because they genuinely opposed its contents, although the likelihood is also that a lot of those votes were cast to signal folks back home, whether the caster of the ballot believed that “no” was the right vote or not.  A key question, to me, is whether or not members of the House GOP caucus who are sending such signals are worried more about the primaries or the general election.  Being able to make a clear determination on that matter is difficult, although we can say with absolute certainty that the party’s members are not responding to leadership.  That is:  we see here the lack of hierarchy in US parties that is more the norm in other countries, because in other settings party leadership can influence a given candidate’s political future.  In the US, a given candidate’s future is determined fundamentally by the primary in a bottom-up fashion.  It is worth noting that no country in the world uses primaries the way the two main US parties do.  At any rate, while it is true that Speaker Boehner won a victory of sorts on October 17, 2013, he didn’t do it because of party discipline.

Now, one thing I was curious about was whether the 144 nay votes came from districts with substantially different margins of victory than the representatives who voted yay.  While this information is insufficient to prove what motivated the voting, it seemed likely that candidates who voted nay might be from safer districts than those who voted yay.  My reasoning being that candidates from extremely safe Republicans districts would be more fearful of a primary challenge, and therefore need to establish their conservative bona fides by voting no, while those who might be more worried about a general election fight might feel the need to vote yes, since they would fear the general public dissatisfaction over the shutdown more acutely than those in very safe districts. There was, indeed, a difference, although perhaps not all that dramatic:  the average margin of victory for the nay seats was 25.9% and the average margin of victory for the yay seats was 20.9%.   I am not sure, at this point, what this tells us, but there it is.

What really struck me, although it was not a surprise, was in general how many of the seats were from non-competitive districts.  Here’s the breakdown: 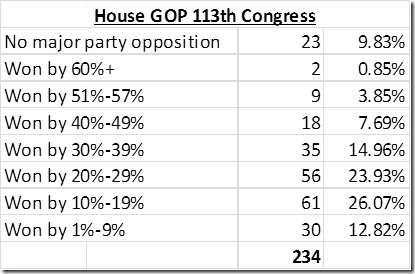 The table includes the three seats that were not part of the budget vote (Young in Florida, who died the day after the vote, and vacancies in Alabama and Louisiana, and I also used the special elections in Ohio and SC rather than the November 2012 data to determine the margin of victory for those seats).

At a minimum this clearly illustrates why the House majority could behave as it did regardless of national public approval for the Congress and for the government shutdown/debt ceiling showdown.  87.18% of the caucus is elected from safe to very safe districts and, therefore, the only real fear that they might have for their jobs would be at the primary stage.

Note:  I did do the calculations for the Democratic seats, since they all voted yes and my main question was differences in margin of victory for yes v. no voters in the chamber.   Clearly, most of those seats would be safe as well.

This is just another bit of information to underscore how uncompetitive our congressional races are.  Further, it is worth noting at this point that Republicans won ~1.5 million less votes nationally than did Democrats.  All of this speaks to question of the quality of representation and democratic feedback in the national legislature.