How Far Can You Get From New York In One Day’s Travel? 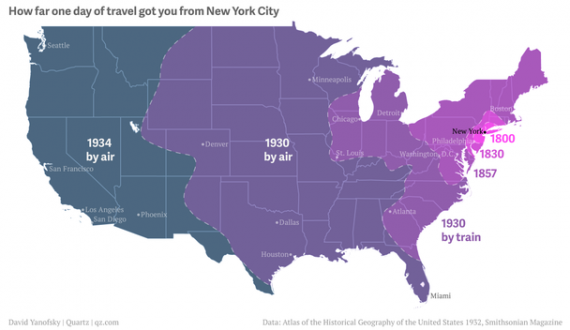 At The Atlantic Cities, Daniel Yanofsky takes a look at one measure of how transportation has progressed in the past 214 years:

Before directions provided by Google Maps, the interstate highway system, cars, the transcontinental railroad, and the Erie Canal, a traveler in New York City could expect to spend a whole day and night traveling over what a suburban commuter now does in an hour.

Philadelphia became a one-day trip for New Yorkers by 1830, but Washington was still more than 24 hours away. In 1930 St. Louis was just barely reachable by train in a day, but Denverwas in reach that same year by plane. In 1934 TWA was able to fly three-stop service from New York to Los Angeles in 18 hours.

Today’s speed is a testament to infrastructure investment and technological improvements. Thegolden spike was driven into the transcontinental railroad in 1869. The first Model T hit the road in 1908. The US interstate highway system was funded in 1956. In 1957, before he was an astronaut or US senator, John Glenn flew his fighter jet from coast to coast in three hours and 23 minutes—at times traveling faster than the speed of sound. This year, Elon Musk announced his plans to build a tube-enclosed supersonic train—known as a hyperloop—that would make the trip between San Francisco and Los Angeles in 30 minutes—faster than Glenn’s plane.

Of course, today, air travel can get you pretty far in one day, assuming the flying conditions are right. Twenty-four hours is more than enough time to reach virtually any destination in Europe, South America, or Africa, for example assuming that you’re flying non-stop. Going west, a quick Google search reveals non-stop flying times within 24 hours for Honolulu, Tokyo,  Beijing. and Mumbai. Indeed, it seems as though there isn’t a single  major city on the globe you can’t reach in 24 hours from New York under the right circumstances, and provided that you’re willing to pay the price. That’s quite a change from the day when 24 hours travel would barely get you out of what we now consider the New York Tri-State Area.