The legendary Colonel H.R. McMaster has been passed over, for a second time, for promotion to flag rank.

Matt Bennett, a VP at the liberal Third Way sees this is a “corollary to the Peter Principle: genuinely gifted and brilliant public servants who are kept far below the level to which they should ascend.” He, naturally, blames Bush. That’s rather absurd, given that presidents don’t sit on promotion boards and that bureaucratic politics is a far more logical explanation.

Still, McMaster would seem to be just the type of scholar-warrior that the military needs in its flag ranks right now. Bennett again:

Now you may be thinking, wasn’t it H.R. McMaster that led the pacification of Tal Afar, an operation so successful that Bush devoted an entire speech to it just last year? Didn’t I read about McMaster’s brilliant strategy in a long New Yorker piece about him? Wasn’t it McMaster who won a Silver Star in the Gulf War, leading troops so bravely and well that Tom Clancy wrote it up? And surely it was McMaster who’s PhD dissertation became a hugely influential book, Dereliction of Duty, that the then-Chairman of the Joint Chiefs made required reading for senior military types?

Well brace yourself — the answer to all of your questions is yes. McMaster is a brilliant tactician, a decorated hero, a soldier’s soldier, and a master of the very kind of war we’re fighting in Iraq — the counterinsurgency. In fact, he’s back in Iraq now, helping soon-to-be-fall-guy David Petraeus try to fend off further disaster. But somehow McMaster’s “superiors” — the suits at the Pentagon who helped bring us the Fiasco that McMaster is attempting to clean up — have decided that he isn’t flag officer material.

The editors at Small Wars Journal have an excellent discussion of the topic, including McMaster’s “rock star” status and the strange nature of promotion boards.

Although Boyd associated with many junior officers during his Air Force career, there were a few, perhaps half a dozen, that he had such respect for that he invited them to join him on his quest for change. Each one would be offered the choice: Be someone — be recognized by the system and promoted — or do something that would last for the Air Force and the country. It was unfortunate, and says something about the state of American’s armed forces, that it was rarely possible to do both.

That probably overstates things a bit but there’s a strong element of truth to it. The military is a bureaucracy and, as in all bureaucracies, it’s far easier to succeed by going along with the flow than by trying to change things. Being a gung ho maverick may well make a young officer stand out and get great evaluations; it’s more likely to piss off at least one senior rater during a career, though, and end one’s chances at promotions.

There’s a, possibly apocryphal, story about a briefing presided over by General Creighton Abrams. When the time came for questions, a young major stood up and ripped the plan to shreds. When he realized that the room was silent, the major said, “Sir, I’m sorry if I’ve offended you. But I’m sure you didn’t get to be a general by telling your superiors what they wanted to hear.” Abrams is said to have replied, “That’s true. But it’s damned sure how I got to be a lieutenant colonel!”

I never served with McMaster and I’ve never heard anything but positive things about him. But it’s hardly inconceivable that a rock star who is both a brilliant tactician and a leading scholar has managed to rub some people above him in the chain of command the wrong way — or even inspire a bit of jealousy at all the attention he’s gotten. And the odds are more than even that those on the promotion board, who came up the ranks in a Big Wars Army, look askance at handing the keys to their institution over to people who want to make radical changes in it.

An aside: McMaster graduated West Point in 1984, about two months before my cadetship began. Damn, I’m getting old. 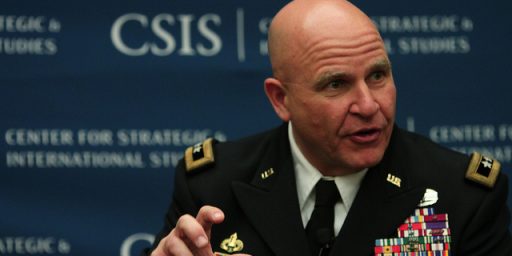